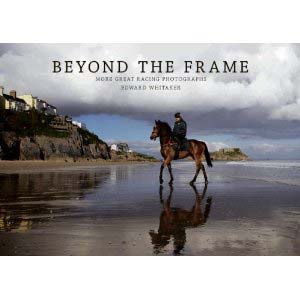 Stunning. That’s the word that best describes a new book by the SJA’s 2008 Sports Photographer of the Year, Edward Whitaker.

Beyond The Frame: Great Racing Photographs is the follow-up to Whitaker’s In The Frame that won the Best Illustrated Book in the 2008 British Sports Book Awards.

Whitaker, who has been with Racing Post since the newspaper’s inception in 1986 and in that time has won Racing Photographer Of The Year four times, has pulled off another winner with this latest collection of his work.

Don’t take my word for it. In a foreword to the book, Jilly Cooper writes: “If genius is the infinite capacity for taking pains, this sums up Edward Whitaker. Summer, winter, night or day, at home or abroad, you will find him at the races: watching, lurking, sweating up as much as any of his equine subjects as he hurtles down the course and across the parade ring, or lies, scattered with brushwood beneath vast fences, to catch the perfect shot.”

What also works is the sheer variety of Whitaker’s work and (cliché alert) every picture tells a story, whether it is a photograph of the Queen at the moment she realises that she has lost a Derby, or a study of A.P. McCoy when he finally wins a Grand National.

From a misty morning just before Cheltenham 2011 as the sun begins to peep at Philip Hobbs’s string, to the last race of a harsh December day under the lights at snowy Kempton, the book is a delight, not just for racing fans but for anyone with an appreciative eye for sports photography.

The glamour of Royal Ascot, Goodwood, Aintree, Belmont, Churchill Downs, Dubai and Longchamp all feature. But one of my favourite photographs shows horses and riders slogging it out through a snowstorm at Towcester in 2010.

“One of the hardest pictures to get is horses racing in the snow. It was forecast that morning but it was the last race and nearly dark before it came,” Whitaker says.

One of the book’s many strengths is the captions that describe the photographs and explain why and when they were taken. So when we see a shot of Frankie Dettori doing his trademark leap off his mount after winning the 2010 Breeders’ Cup Turf on Dangerous Midge, we know that Whitaker’s decision to use flash in a shadowy unsaddling enclosure paid dividends. The subject is lit perfectly against the gloomy background.

As well as the wonderful action, there are also intimate portraits of some of racing’s leading figures, as well as candid studies of racegoers in all their finery. It all comes together to capture perfectly the magic and essence of the sport.