Anyone for tennis? Not down at the local club, though. In Bulgaria, actually. And you have to be a journalist who isn’t – and never has been – a professional tennis player. 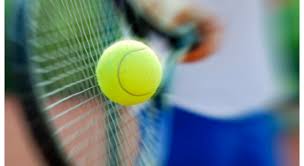 The inbox at SJA Towers was flooded yesterday with an email – just the one – from Katerina Guenova of the Bulgarian Tennis Federation, inviting our members to take part in something called the World Tennis Championship for Journalists.

Apparently, 2014 will see the 37th such championships, so several SJA members must have taken part before. This year the event takes place from August 31 to September 8, at Albena, where it was last held 11 years ago.

“Nice warm weather, sea water and pleasant emotions on court and around it” are anticipated. The complex has a total of 13 red clay courts as well as a restaurant and swimming pool, and is situated 30 kilometres from Varna.

There is even a YouTube clip of the last time the championships were held, in Slovakia last year. You can see how popular the event must be – the clip has had 30 views since being posted in September 2013…

That said, the organisers didn’t bother sending an invite to the Sports Journalists of Great Britain last time.

This year, entry is in two tiers – 280 Euros “cash on the spot” for participants, and 300 Euros for accompanying persons – and children under 12 years old go free.