How do you get into sports journalism? It’s a question many of us will have been asked, producing a myriad of responses.

Graham Jenkins, SJA member and freelance rugby union journalist and producer, has made it his mission to ask the question. In the process  he has discovered how the careers of our leading rugby broadcasters and writers began and how they have developed.

A veteran of five World Cups, Jenkins launched The Forward Pass Podcast with the support of Rugby World, who have produced a series of articles drawing on the experience, anecdotes and advice offered by those interviewed.

“I’m glad to say the feedback has been good,” he said. “I had often been asked over the years ‘how do I get a job like yours? Or in other words, ‘how can I get paid to watch sport?’

“I knew that my friends or colleagues on the rugby union circuit were also a friendly bunch so during some downtime last summer I rang Nick Mullins and kicked it off with a chat about his career and memories.

“A couple of colleagues were soon ‘retiring’ so I thought it would be a great time to tap into their vast knowledge and experience before they stepped away for the benefit of those wanting to follow in their footsteps or fans interested in how they do their job.” 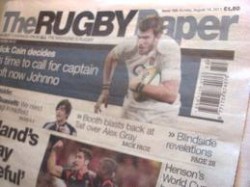 ns has been reporting on the sport for more than 20 years for various media outlets including Scrum.com, ESPN, BBC Sport, Rugby World and The Rugby Paper.

Insights include Robertson’s swift transformation from Scottish international fly-half to iconic name in broadcasting. The former teacher at Fettes College recalls how injury ended his career in 1971: “I did the cruciate ligament in one knee and the medial ligaments in the other and if I had been a horse they would have shot me so that was the end of it…”

He also speaks of his great fortune to have been able to learn first-hand from two industry legends – Cliff Morgan and Bill McLaren. “It wasn’t a bad couple of people to befriend on the outset of the tour of the world of rugby. Both were such brilliant, brilliant people and such great fun, I was doubly blessed, there’s no question about that.”

Jones discusses in detail how he views the job of a correspondent. “Have opinions. Get off the fence every single time,” he tells Jenkins. “Occasionally you might do it to provoke a reaction.”

“Whether they wind people up the wrong way is another matter, but I have developed a thick skin and I’m going to continue down the path I have set for myself and that is to say exactly what I think.

“But I am not slaughtering people week in, week out and I also enjoy writing about someone I really enjoy watching.”

McLaughlan offers an insight into the challenges she faces when reporting from the sidelines. “I am not there to be friends with the players and the coaches, that’s not my job,” she says.

Rogers, who has witnessed almost every major moment in the modern era, describes how he gets even closer to the action. “It sounds corny, but it is as near to playing the game as you can get without actually playing the game,” he says. “You get the adrenalin rush and you are as close to the action as the players are.”