Derrick Collier, a former production editor and deputy sports editor at The Sunday Times, died in Banbury on Tuesday (February 14). He was 93.

Born on May 23, 1923, he attended Hemel Hempstead Grammar School, where he excelled at athletics, cricket and football, breaking many of the school’s long-standing athletics records. He joined the Daily Sketch newspaper in 1940 as a trainee a day after leaving school. 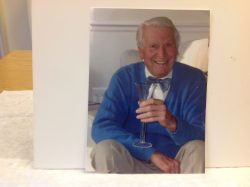 One of his first tasks was to identify members of the cabinet in a photograph. He took the picture to the War Office and, while waiting for assistance, Sir Winston Churchill walked into the office and asked him who he was and what he wanted. He was told to sit down while Churchill picked up the photograph and wrote the names of his cabinet members on the back.

Collier (right) volunteered to join the RAF in 1942 and was posted to Burma during the war, where he served in an Air Sea Rescue unit.

In 1947 he joined Allied Newspapers as sports editor of their London office and also wrote about golf for Kemsley regional newspapers. He then worked for the Sunday Graphic newspaper from 1956 until it closed in 1960, when he joined The Sunday Times as deputy sports editor.

He was later promoted to production editor, where his cheery nature helped him deal with many cantankerous printers.

One colleague said of him: “He was rather scary on the press floor in the hot metal days until you realised what a decent man he was. He was the type of bloke that made you really feel you were on a newspaper.”

When The Sunday Times moved to Wapping in 1986 there was pressure on Collier to get the newspaper published on time and the proprietor, Rupert Murdoch, went down to the press floor to make sure the deadline was met. When Murdoch asked Collier what he required, Collier replied: “If you get out the way we can get the paper finished.”

There were no hard feelings. Murdoch attended a sumptuous function at The Oval cricket ground in 1988 to mark Collier’s retirement at the age of 65.

A keen golfer, he played off a handicap of six and was captain of Berkhamsted golf club in 1971. He was a member of Tadmarton Heath golf club in Oxfordshire for 40 years.

He is survived by his wife Mary who is 95. The couple, who met at school, were married for 68 years and have two sons, Neil and Mark, four grandchildren and four great-grandchildren.