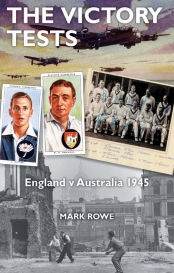 The Victory Tests, the story of the 1945 cricket series between England and the Australian Services, written by Mark Rowe, and published by SJA treasurer Randall Northam’s publishing company, SportsBooks, has been shortlisted for the Cricket Writers’ Club book of the year.

The unofficial series staged in the summer of 1945, almost immediately after VE Day, is almost forgotten today. Before Rowe’s book, the only history of the series is a limited-edition Australian book on the subject.

Yet the five matches between a near full-strength England team and Australian servicemen, at least one of whom had just been released from a Prisoner of War camp, drew huge crowds. Great cricketers played on both sides: Len Hutton, Wally Hammond, Keith Miller, Lindsay Hassett.

Rowe’s book was described in the Wisden Cricketer as “…a vivid and passionate account of that extraordinary summer. Combining breathless accounts of the matches with wide ruminations on the game as it was then, Rowe has produced a fascinating book of a golden summer that rivals any of the great Ashes contests”.

Magazine editor Rowe got the idea for the book after a working holiday in Australia more than a decade ago. It is his second book on the wartime era, but his first on a sporting theme.

The British Sports Book Awards are to be staged at the Savoy in London, on May 9, when the winners of a number of categories will be announced.

Other SJA members who are among the shortlisted candidates include: