The slump in the book publishing business has seen leading journalist, MICHAEL CALVIN, a former SJA Sportswriter of the Year, turn himself in to a self-publisher for his latest book, after spending a year with Millwall. As Calvin says, Norman Giller has a lot to answer for

“Santa” will be a courier with 3,000 copies of Family: Life, Death and Football.

It will have taken three working weeks for the printer to produce my first self-published book. It’s been an interesting process, and it is time to name The Guilty Man.

I’ve been lucky. I’ve met the right people, in the right place, at the right time. Reg Hayter, of sainted memory, saved me from reporting bowls club dinner and dances for the Watford Observer.

Donald Saunders, the fabled Saunders of the liver, eased me through his retirement, and into his role as chief sportswriter on the Daily Telegraph.

Ian Wooldridge, the ultimate travelling companion, atomised the theory it is best never to meet your heroes.

And now, I give you Norman Giller.

Norman’s weekly columns on the SJA site crystallised my thoughts, eased my frustrations. Self-publish and be doomed, he said. So I did (or, to be strictly accurate, I will).

I knew I had the makings of a good read, provided I knew my way around the alphabet. I’d been given unprecedented access to Millwall during their promotion season.

So I’d turned up for the first day of pre-season training and I was on the substitutes’ bench at Wembley, 333 days later. 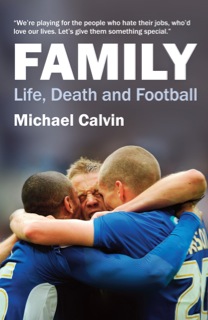 In that time, I’d found that Millwall operate in a parallel universe to the Premier League. There are no huge budgets, no hyper-inflated egos. The players are family men, close to their roots. They understand who they are playing for, and why it matters.

I thought that the book might remind us of the humanity football is in danger of losing, as it worships empty celebrity and the quick buck.

The mainstream publishers gushed, and then did nothing. They’d spent their marketing budgets on the likes of Cheryl Cole…sports books stink the store out… the proles in south-east London don’t buy enough books……

I followed Norman’s advice and liaised with Antony Rowe/CPI. Their go-to-guy Geoff Fisher put up with my ignorance, and ushered me through the process with the minimum of fuss.

Their online sales operation fits into my promotional website, www.michaelcalvin.com, which hopefully has a longer shelf life. I set-up distribution deals through Gardners Books, who liaise with the likes of Waterstones. Beware Amazon, though. A bureaucratic nightmare.

The book will be out in mid-October. All reviews, good or bad, welcome.

Millwall players and staff will be helping out with special signing sessions, staged in the dressing room. Thanks to my son, I have also marketed the book through social media and fans’ websites.

I’ve had several hundred pre-orders. I’ve replied to each one, personally. You know it makes sense.

If anyone needs advice, or contacts, drop me a line at mike@michaelcalvin.com

Thanks Norman. I owe you one.

2 thoughts on “Be a self-publisher: no one likes you, but you don’t care”