The media, in particular Mark Souster of The Times, has played its role this week in the civil war going on within Twickenham. Is it another case where, after shooting the messenger, the message will be overlooked? 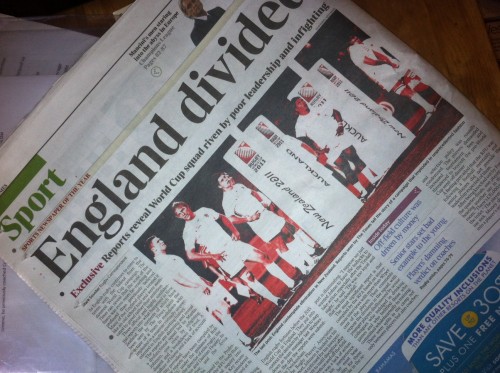 There appeared to be no sense of irony at all this week, when as Lord Leveson was allowing his A-list celebrity witnesses to unload life-long frustrations with the way they had been covered by the press, across town at Twickenham, the RFU, English rugby’s governing body, was issuing a statement that announced it was to launch an immediate investigation into how three high-level reports had been leaked to The Times.

At Leveson, Max Mosley, the former F1 boss, was never cross-examined with the question: “But Mr Mosley, can we be clear, it was you in those photographs published in the newspaper, wasn’t it?”

At rugby HQ, no one seemed to consider that the caustic criticisms which made it to the front page of The Thunderer were highlighting the real crimes against the sport, rather than the act of leaking of them.

Is it too late to adding shooting the messenger to the events to be contested at Woolwich next summer? It would surely aid Britain’s ambitions for fourth place in the Olympic medals table.

How has English rugby come to this? From two World Cup finals in four years, a healthy balance sheet and thriving numbers of kids taking up the game, reduced in the space of 18 months to a sport with no chief executive, no national coach nor team captain, and with its director of the elite game traduced with the title of “the Sepp Blatter of rugby”.

It is when the sports minister jumps aboard the critics’ bandwagon that you sense there must be a problem, though the old “root and branch” overhaul Hugh Robertson was calling for on Thursday night might be a case of baby out with the bathwater, especially with a Six Nations campaign but six weeks away, and a World Cup in England in less than four years.

There is little doubt that what Mark Souster, the rugby correspondent of The Times, has done this week is an example of old fashioined, good journalism, working his contacts and delivering not just one, not two, but three confidential reports, and the damning comments within them. Souster was doing his job (and doing it rather well, as it happens). What it exposed, and the motivation behind the leak or leakers, merely expose some of the deep-seated issues at Twickenham.

Of course the RFU, through Rob Andrew, the director of elite rugby who commissioned one of the reports, and Damian Hopley, the head of the players’ union which ordered the second, have decried the leakers, rather more than addressing the message the reports contained.

As Martin Corry, a one-time team mate in Martin Johnson’s England forward pack, now an accomplished broadcaster, said yesterday, it is somewhat symptomatic of the lack of leadership exhibited in the aftermath since the World Cup debacles. “It could have been very different if people at the RFU had been prepared to stick their heads above the parapet,” Corry said. “Instead they just stayed quiet and let Johno take all the shit.”

It is little wonder that Sir Clive Woodward, for so long regarded as English rugby’s saviour in exile, has sidestepped the regular calls for his return to Twickenham. Would you want to join such an apparently dysfunctional organisation, especially one in which it seems no one can trust their colleagues?

In all of the latest furore from Twickenham about the leaking of the documents, little attention appears to have focused on the players, their comments and thoughts about England’s latest World Cup campaign.

It left the erstwhile England captain, Lewis Moody, who had led his side to Six Nations victory in April, more frustrated even than on the day that his team were knocked out of the World Cup tournament by eventual finalists France.

Moody said it was “deeply disappointing to see players’ feedback aimed at improving England rugby, and which we were promised would remain confidential and anonymous, being put in the public domain for political purposes”.

Moody had not escaped some harsh criticism from some of the anonymous respondents to the Rugby Players’ Association survey.

“Captaining England was, and remains, the ultimate honour for me and I accepted that honour knowing all the scrutiny that came with it,” Moody said.

“I am confident I did the job to the absolute best of my ability but if some of the players thought that was not enough. I will have to learn to live with that. I have always been my own fiercest critic and have already been honest that there were some things I wish I had done differently at the World Cup, but I have learnt from the experience and hope others can do the same.

“I put my body on the line for the lads, the team and England every time I played and anyone who has watched me play knows that I give everything on the field and have always prioritised rugby ahead of everything else, including financial reward. I have only ever undertaken personal commercial activities in my own time and I’m comfortable I got that balance right at all times.

“Where I had to be involved in commercial conversations with the RFU it was as captain, working with the RPA, representing the best interests of the players, not for any personal gain. I do not think anyone who knows me would think different.”