A book on Liverpool in the 1980s by a former lottery ticket seller at Anfield is too much about mundane office politics, too little about some giants of football for ERIC BROWN

Asking an Everton supporter to review a book on Liverpool is a bit like expecting a turkey to enjoy Christmas.

However I’ve covered plenty of Liverpool matches without bias creeping in, so what can be made of Frank Gamble’s effort? 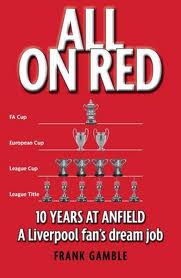 Who, indeed, is Frank Gamble? We’ve had books by famous players, managers, coaches and administrators and some by not so famous players who seem to have been in the game only as long as it takes to boil an egg. But I never thought I’d read a book by a lottery ticket seller.

Yes, that’s correct. Frank Gamble sold and organised the sales of lottery tickets for Liverpool FC over a decade between 1979 and 1989. He even appears to accept his qualifications for writing a book about Liverpool are, well, as genuine as a Liver Bird’s nest. In the preface he says: “As a salesman I began to consider what my USP (Unique Selling Point) was to entice people to read my scribbling. That was easy. I had worked for Liverpool FC for just shy of 10 years.” Whether this will be enough to trouble the best sellers’ list remains to be seen.

Gamble has woven together a tale of intrigue, disagreement, petty penny pinching, face to face confrontation and occasional good humour in an area of Anfield which, I’m sure, never expected to be propelled into the limelight. With redundancy looming from his factory job, Gamble got another working for the club he supported from schooldays, defying his Everton fan father.

He stood in the Boys’ Pen and soon learned a lesson about Liverpool supporters in the early 1960s. “I was punched, robbed, kicked, verbally abused and pissed on,” he says.

None of this put Gamble off, but when he came to work for the club he found the lottery ticket office almost as big a jungle as the Boys’ Pen. There were arguments over most things from cost cutting and ticket distribution to prize winners, club cars and employment contracts.

Gamble never had a contract from Liverpool, who acted illegally by not providing one. This sometimes worked to his benefit, Gamble says, because he didn’t hesitate to tell his boss to stuff it whenever he didn’t want to comply with an instruction, claiming justifiably that it wasn’t in his contract.

There’s a lot in this book about the sort of inter-office politics that goes on everywhere before Gamble realises he’d better awaken his slumbering readers by putting in a few stories about people they might actually have heard of. So Bill Shankly, Joe Fagan, Kenny Dalglish, Gary Ablett and Phil Thompson suddenly get name checks.

The only one Gamble seems to have encountered regularly was Ablett who distinguished himself by becoming the first player to win FA Cup medals with Liverpool and Everton. Seems Gamble gave him a lift to training most days when Ablett was a Liverpool youth team player.

The rather tedious saga winds on until we find Gamble leading a coach party of fans to the European Cup final in May 1985. Gamble suggests dark forces possibly unconnected with Liverpool were at work before the fatal incident that saw 39 Juventus fans lose their lives that night in Brussels.

He recalls seeing a fan wearing a red England shirt urging others to get stuck in to the Italians. Gamble writes that the fan had a “southern English accent”. Perhaps Gamble doesn’t know Liverpool have considerable support in the Home Counties. Anyway, he says the stadium was a crumbling cesspit built for athletics, the Belgian police panicked and looked out of their depth while UEFA’s ticket distribution was a joke. On the return trip he mentions Liverpool fans being intimidated by French and British police.

Belatedly , Gamble appears to realise he might have gone over the top. He criticises club chairman, John Smith, who unwisely insisted next day that Liverpool would fight any ban from European competition. Then, almost as an afterthought, he goes into contrite mode when the culprits are finally convicted and given sentences he blasts as being too lenient.

He writes: “There are many culprits for Heysel; perhaps we all share a modicum of guilt. This has been my mea culpa. I offer my prayers to the souls of the thirty-nine and to their families and hope that they rest in peace and offer one final word – Sorry.”

Fortunately, for him, Gamble avoided going through it all again. He became disenchanted with the ticket office intrigue and quit before Hillsborough rolled around.

The book might appeal to those involved in the ticket office during Gamble’s employment there and to a few others mentioned along the way. But there are no important revelations. If this is a success look out for an avalanche of books by club turnstile operators, stewards, announcers, doormen, car park attendants, groundsmen and that bloke who sweeps up discarded fag ends and sweet wrappers.