Fans’ football books are one thing, but Patrick Collins’s time spent among the fans is much more rewarding, says STEVEN DOWNES

Nick Hornby’s got a lot to answer for. It was 1992 when Fever Pitch, the very literary novel about life as seen through the eyes of a young Arsenal supporter, launched Hornby’s career as a novelist after winning the William Hill Sports Book of the Year prize. The outcome of the 2011 edition of that award was being announced in London this afternoon. 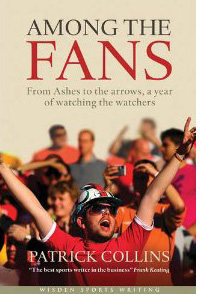 In the past two decades, “the Premiership years”, almost every football fan seems to have heard the old saw that “everyone’s got a book in them”, and decided to act on it. Astonishingly in some instances, some publishers have even taken on the manuscripts (and there have been an awful lot of ManU-scripts) and put books on the shelves. But then, no one ever said that “everyone’s got a good book in them”.

As Eric Brown’s review of All On Red at the weekend demonstrates, not every “I’ve been a fan of Melchester Rovers since I was six“-type book manages to engage a readership outside the most fervant fans of that club. But as that book’s publisher, Randall Northam, says, there is now an entire genre of football fan books, inspired by fanzines and Hornby.

Given the state of the sports book publishing business, that can only be because many of these books, especially about the bigger clubs, sell. A quick check of Amazon shows that 4,293 ManU-scripts have been turned into books, with two of the most recent having been written by SJA members.

The industrious Harry Harris has gone for the Paul Hardcastle angle, his latest book entitled 19: The Remarkable Story of United’s League Championship Record. Harris shares the book’s spine with Sir Bobby Charlton (foreword) and David Beckham (introduction), a savvy couple of endorsements that probably carries much more weight with potential purchasers than any number of “Official” tags on rival books.

Harris has collated interviews with key figures in the club’s history, shrewdly beginning by stressing how unlikely it seemed, two decades ago, that United could ever win another league title, never mind the dozen it took to overhaul Liverpool’s record. Given Harris’s own background in covering the game, his unofficial players’ player poll makes especially fascinating reading.

By contrast to Harris, Will Tidey’s offering is his first book. Life With Sir Alex might be a bit of a misnomer, were it not for the clarifying strapline: “A Fan’s Story of Ferguson’s 25 Years at Manchester United”.

Tidey, a south coast-based United fan (sorry, Will, it has to be said) has not actually spent much time with Fergie, apart from following the master manager from game to game, trophy to trophy over the past quarter-century. As such, the book falls firmly in the Hornby category of football book, with more attention on the football memories rather than the personal rites of passage.

So the recollections of that night in Barcelona and the other great games seen from the stands gives this volume a fresher feel than many official histories, although the reliance on the cuttings library and old match programmes is evident. So too is how the Tidey household must operate a form of Desert Island Discs to provide milestones to history, or he has depended on Mike Reid’s history of the charts.

Chapters begin, “The strutting guitar riff of Dire Straits’ Money for Nothing was blasting from my parents’ stack stereo system…”; “September 1992: Nirvana’s Nevermind was crackling from every Walkman on the school bus…”; and the summer of 1990 is inevitably referenced by Nussum Dorma. 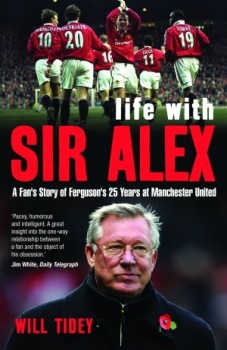 The later chapters, of more recent memory, thankfully depend less on such authorial crutches and United fans ought to enjoy having their red-tinted memories jogged by Tidey’s affectionate recollections of his own obsessive following of their club.

So how do you appeal to sports fans without treading the same path so many have gone before? Trust Patrick Collins, the Mail on Sunday‘s master columnist and possibly the ultimate sports fan, to devise an inspired solution. The book’s title, Among The Fans: From Ashes to the arrows, a year of watching the watchers works as a reviewer’s summary as well, but does not do justice to the delights of Pat’s deft writing within the covers.

The book is significant, because it is the first to be published under Bloomsbury’s Wisden Sports Writing imprint, which has the similarly esteemed Matthe Engel involved in the background. With further books such as this, it will quickly become regarded as a guarantee of quality.

Collins’s great skill is to be warmly affectionate of his subjects whenever he can, but through his skilled, understated writing, to be devastating in its criticism when necessary. A smiling assassin with a laptop.

There is a gentle opening at a Sussex point-to-point, where Collins does little to disguise his personal distaste for some elements of the horsey set, while his admiration for the bravery of the riders and their magnificent hunter chasers is also evident.

Collins spends time  at Wimbledon, with the Barmy Army in Adelaide, and alongside race-goers at Cheltenham and Crayford (dogs, that is).

Familiar to his Sunday readers will be his withering disdain for the millionaire oafs of the England football team, as chapter-by-chapter, Collins lets slip one or two tricks of the trade of which he is such a master. Five times the SJA’s Sportswriter of the Year, this effort was deservedly short-listed for the Sports Book of the Year.

It is from a visit to the BBC radio studio for an edition of the 606 phone-in that Collins essays an insight into why so many football fans, probably including many of those fans called to write books about football, often harking back to  “those distant days before the convulsion of avarice that sent it lurching into the arms of the Premier League with its sheikhs and oligarchs and wad-waving chancers”.

As Collins observes, “The game still suffers its ranters and ravers, just as the pub attracts its bar bores. But these days there is a crucial difference. When the football fan speaks about matters that are relevant, serious and close to his or her heart, there’s an excellent chance that the nation will be listening.”

And if the nation is seeking a reliable snapshot of sport as it is watched today, then they really ought to read Pat Collins’s book, too.

Life With Sir Alex: A Fan’s Story of Ferguson’s 25 Years at Manchester United, by Will Tidey (Bloomsbury) £8.99

Among The Fans: From Ashes to the arrows, a year of watching the watchers, by Patrick Collins (Wisden Sports Writing) £18.99