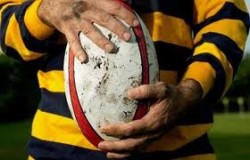 Adam Hathaway is the new chairman of the Rugby Union Writers’ Club. Hathaway succeeded Paul Morgan at the end of season annual meeting and his first task as chairman will be on England’s three-Test tour of South Africa.

Hathaway is rugby and cricket correspondent of The People, having held a similar role at the News of the World. He came up via a stint at Hayters’ agency and has contributed to every paper on what was Fleet Street. He has covered the last three Rugby World Cups and also writes for Rugby World, Agence France Presse, for Golf International and other magazines.

The Rugby Writers’ Club has a new vice chairman in Alex Lowe (Press Association), with Sarah Mockford as secretary, Sara Orchard as honorary assistant secretary, and Chris Jones as treasurer.

Adam Hathaway can be contacted at adam340uk@aol.com