An SJA member who has already helped to raise £1.4 million for the Help for Heroes charity is looking to double that figure by having a hand in staging a charity international rugby match at Twickenham in December. 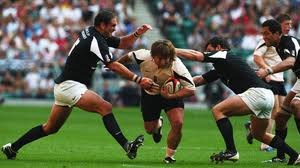 Jolyon Armstrong, through his PR company, is helping to promote a second Help for Heroes match on December 3, this time between sides representing the Northern and Southern Hemispheres.

Armstrong helped to pull together the previous Help for Heroes match in September 2008, when a Help for Heroes team led by Lawrence Dallaglio took on an International XV captained by Scott Gibbs,  including 20 capped players  alongside servicemen and academy players, and managed to draw a crowd of 52,000 and raised £1.4 million.

This second match raises the bar because of the North v South rivalry and that fact that many players who are playing in Rugby World Cup starting in September will be available. The Northern Hemisphere  team will be run by Dallaglio, together with Jason Leonard and Ieuan Evans, while the Southern Hemisphere team will be managed by  Sean Fitzpatrick and Michael Lynagh.

The captains  and coaches of the two teams  will be announced  on August 15.

Australia, who are due to play Wales at Cardiff on December 3, have said they will release seven players not required for the Test to be available at Twickenham.