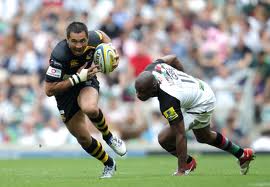 The Premiership clubs, two of the oldest in the world, confirmed on Tuesday that the January 30 LV= Cup fixture will be switched from the more prosaic environs of Adams Park in High Wycombe.

Instead, they will play the game in front of Sky Sports TV cameras in a newly constructed 5,000-seater stadium in the grounds of the plush Emirates Palace hotel, where the cheapest rooms are a mere snip at around £175 per night.

Even the most brilliant of freelancers might struggle from this one-off fixture to generate at least £1,000-worth of work necessary to pay for the trip. And sports editors with budgets already under the cosh will doubtless be delighted by such an announcement – or more likely they’ll be taking agency.

The move is a massive gamble by Wasps, whose management expects no more than 300 die-hard fans to fly to the Arabian Gulf for the ground-breaking fixture as the first UK domestic competitive rugby fixture to be played overseas, although Harlequins’ sponsors, Etihad Airways, who are based in the UAE, are expected to offer some special flight deals.

The move has received the support of the LV=Cup tournament organisers, the Rugby Football Union, the International Rugby Board and Harlequins.

The clubs have previously staged Premiership matches at Twickenham and Wembley, and generated massive gate receipts, most recently when Wasps game against London Irish was watched by 74,212 on Dec 27.

But the LV Cup is widely regarded as the third-string competition for English clubs, and the appeal of this fixture may be limited. Certainly, the reaction on fans’ message boards was sceptical, with the major concerns being the £4.50 price of a pint of lager in Abu Dhabi, and the general lack of availability of beer in the UAE.

That, clearly, is not the party line being run out from Wasps.

“This  is a  competitive game, not about a trip to the sunshine,” said the former Wasps and England captain, Lawrence Dallaglio, now a Wasps board member, who visited Abu Dhabi last year. “At this stage it is a one off – but anything is possible.”

The teams are due to fly out together four days beforehand, to give them barely any time to acclimatise to the anticipated temperature  of  23 degrees at game time – which will be 7.30pm local, four hours ahead of the UK.