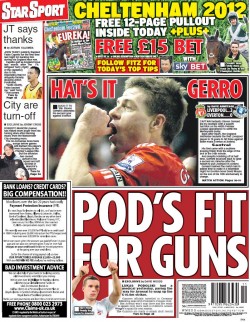 The Daily Star has confirmed the appointments of Jeremy Cross as chief sports writer and David Woods as chief football writer.

Cross joined the Star three years ago from the Wardles Agency and before that worked for the Yorkshire Post.

He was recruited to cover the Manchester clubs and will continue to be based in the north.

Woods, who celebrated his 55th birthday on Wednesday, has been a football reporter on the Star since 1998 and was a sports sub on the paper for 10 years before that.

Prior to that he was chief reporter and news editor for the Colchester Evening Gazette.

The appointments have been made following the tragic deaths from cancer of Brian Woolnough and Danny Fullbrook, who were chief sports writer and chief football writer respectively.