Calcio Italia, the English language magazine devoted to Italian football, has closed,with all its staff made redundant. 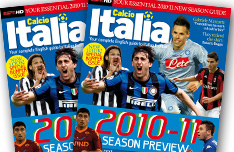 Launched in 1992 to complement Channel 4’s coverage of Serie A, without the benefit of promotion alongside a weekly terrestrial TV show, circulation on the monthly title has been struggling for some time. Faragher Jones, the magazine’s Bath-based contract publishers, announced on Wednesday that there will be no future editions.

Leaonne Hall, Calcio Italia‘s editor who also ran We Love Darts magazine, is among those to have lost their jobs. She was not available for comment.

The football magazine’s Twitter feed announced: “Regretfully we cannot take enquiries at the office – there are no longer any staff working at Faragher Jones Ltd, all have been made redundant.”

“With great regret, we announce that Calcio Italia will no longer be published. Despite our best efforts, a combination of bad debts and the difficult economic climate has forced us to close the magazine.”

Subscribers are directed to an 0844 number, where they are informed that they can expect a letter next week from the publishers regarding refunds of ourstanding subs.

“We are deeply sorry for the pain this announcement will cause and we would like to take this opportunity to thank you for your support,” the magazine’s Facebook page continued.

“It has been an absolute pleasure to work on Calcio Italia, and it is with immense sadness that we share this news with you today.”

It seems the publishers have gone in to administration, with regular contributers such as Gabriele Marcotti and James Richardson left to wait with other creditors for any outstanding fees.