NORMAN GILLER’s known a few footballers in more than half a century and Andy Carroll seems like a throwback to an earlier age, and not just as an old-style centre forward

There are veteran sports reporters who would not have known whether to yawn or laugh when – before Tuesday’s England v Wales match – Fabio Capello warned Andy Carroll publicly about his drinking. We’ve seen and heard it all before over many years with a procession of footballers. The warnings are invariably heeded until the next pint or three.

From the day Liverpool signed Carroll for a ridiculous £35 million I thought they were taking a huge gamble. It was already the talk of the football village that the 22-year-old striker liked to prove he had hollow legs, but I am more concerned by his weight than his beer consumption.

I have been around sportsmen all my working life – that’s for more than half a century – and I can tell at a glance when an athlete is carrying more pounds than is good for him. Carroll is a hefty boy, and the older he gets the harder he will find it to shift the excess  baggage.

He could find his game suffering before he is much past his mid-20s. Pints will add pounds to his frame, and he will lose that yard of pace that makes him such a threat as he bulldozes through defences with a style that is a throwback to the old style centre-forwards.

So far his return for Liverpool’s record fee is – partly because of injuries – just 13 games and three goals. For England, he has made three appearances and scored once. Comparisons beckon about performances near public bars rather than crossbars.

I made a verbatim note of Capello’s reponse to the press conference questions about Carroll.

In what could have been a perfect Chico Marx impression, he said: “… his style of life is a problem if you no good, because he needed to be careful, because he is important player not only for England team, also for Liverpool. I think he understand what he need to do … If he want to be a good player, a good sportive man, he need to drink less than the normal.” 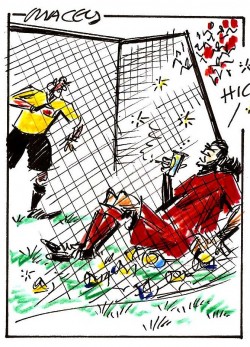 Capello failed to explain what he meant by “normal”, and as the reporters filled their notebooks with what was back page gold dust, I tried to imagine how Liverpool manager Kenny Dalglish was reacting to the response.

Even in his faltering English – be fair, he’s only been in the job for four years – Fabio had ventured into what should be exclusively club manager territory.

Perhaps rather than stretch his English vocabulary to breaking point, Fabio should adopt the Anglo-Saxon style that Alf Ramsey used when he became England manager.

Alf’s first victory as England manager was on a 1963 tour match in the then Czechoslovakia. Jimmy Greaves, scorer of two goals in the 4-2 triumph, was nominated team spokesman in the dressing-room after the win.

He put up his hand and said, “All right, Alf, if a few of the lads have a look round the town tonight?” This was code-speak for “all right if we go on the bevy?”

“No you fucking can’t,” Ramsey said.

“You’ll come back to the hotel and have one drink before bed.” Ramsey had laid down his marker for how he expected England’s players to behave while he was in command.

A year later when six players – including Greavsie, skipper Bobby Moore and even the saintly Bobby Charlton – broke a curfew on the eve of a trip to Portugal, they found their passports on their beds when they crept back into the hotel.

The next morning after training, Alf told them: “If I had replacements here, you lot would be on the next train home. Let this be a lesson that I will not tolerate this sort of behaviour. We have a job to do for England and we will get on and do it.”

England flew to Portugal later that day and beat Eusebio and Co 4-3, with a hat-trick from Johnny “Budgie” Byrne, who was one of the night-out ringleaders. Dear old Budgie could drink for England.

I HAVE BEEN Boswell to Greavsie’s Johnson and have recorded in several of our 20 books together how drinking was part of the culture in his playing days.

As with everything he has done in life, Jimmy did it better than most and became an alcoholic, on the brink of drinking himself to death.

Back in those pre-breathalyser days, we Press boys stood shoulder to shoulder, elbow to elbow at the bar with the players, enjoying their company and never writing a word about it in our newspapers. It was a massive cover-up for which I am not proud … but I have wonderful memories of great nights out.

The best drinking schools were in the King’s Road and at the Bell and Hare at White Hart Lane, where Spurs legend Dave Mackay was king of the castle. A handful of trusted journalists were allowed in the inner sanctum provided (1) we kept our mouths shut, and (2), much more important, we got a round in.

The Chelsea school had the heaviest drinkers. If you got caught in the company of king piss artists like Alan Hudson, Peter Osgood, Charlie Cooke and Allan Birchenall, you were lucky if you rolled home before midnight.

Greavsie, of course, was a regular at the Dave Mackay drinking school, but what none of us realised was that after we’d had our fill, he would go and carry on drinking in his Essex haunts.

It took enormous character for him to beat the bottle. He and I had our last alcoholic drinks together on February 20, 1978, Jimmy’s 38th birthday. Our final toast was: “Let’s go and get sober out of our minds.”

I suggest that would be a good call for Andy Carroll to make.