How did Victorian football writers file their runners? After reading this book, ANTON RIPPON has the seed of an idea

There is a lovely story about a Victorian football reporter who has to file using carrier pigeons. One day, at half-time at Plumstead, he releases the bird but then realises that he hasn’t attached the score to its leg. So as it flies off into the distance towards his office, he shouts after it: “Woolwich Arsenal 3, Leicester Fosse 1.”

Of course, the story is apocryphal, and it certainly doesn’t appear in a cracking new book, Goal-Post: Victorian Football, an anthology of some of the very best football writing from that gas-lit era of Sherlock Holmes and Jack The Ripper. 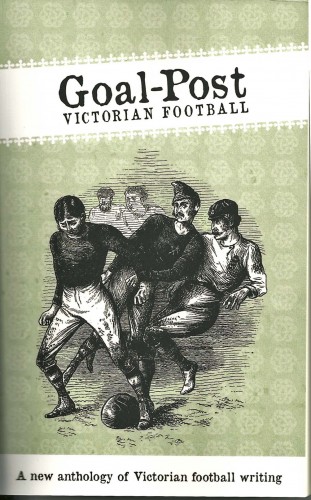 This collection of contemporary articles and extracts covers the birth and development of the game, many written by its first paid observers.

The book includes a fascinating piece by Henry Leach on the life of a travelling football reporter. Leach began his career as a local football writer before being appointed editor of the Nottingham Evening News – that long-gone newspaper’s original offices still grace the middle of the city, the paper’s title carved in stone above the doorway – when still in his early 20s.

Leach moved to London in 1898, to write about sport for various publications including the boys’ weekly paper, Chums. He went on to become a leading golf writer and editor of Golf Illustrated.

Writing in Chums in 1900, Leach observed that although there were professional footballers, it was still possible for them “to remain a gentleman and a sportsman”.

He went on: “Just as there are black sheep in every fold, there are professional footballers here and there who do the game no credit. But for the most part, as those who know them best will agree, they are a respectable set of fellows and, as I said at the beginning, in all probability better men than they would be if they did not play the game they love so well, and be paid for doing so.”

We are also treated to CW Alcock on football tactics, interviews with England captains Tinsley Lindley and GO Smith, the Newton Heath libel case, the history of football by Montague Shearman (one of the founders of the Amateur Athletic Association and later a noted high court judge), Frank Brettle and the “making” of Tottenham Hotspur, the first international match between Scotland and England, the splendidly named David Drummond Bone on the game north of the border, football by electric light, and Helen Zimmern – who was born in Germany but raised in Britain where she became an author and translator – on football in Italy.

Her article on Calcio was written in 1900 for The Leisure Hour, an illustrated magazine issued by the Religious Tract Society. Zimmern had gone to work in Italy, for the Florence Gazette and Corriere della Sera.

The anthology is edited and produced by Paul Brown who has written about football for The Guardian, Four FourTwo, When Saturday Comes and Loaded. It is a brilliant idea, thoughtfully executed.

Thank goodness modern reporters don’t have to stock up on birdseed.