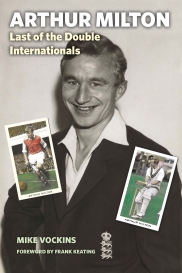 With the subject of England’s last football and cricket dual international for his book, Mike Vockins has produced a piece of outstanding sports journalism, says PETER WILSON

There are very few things you can be sure of in sport, but it is safe to say that we will never see another sportsman capped at senior level for England at both cricket and football. Indeed, with such a gap since it was last achieved, it is difficult to believe that 12 have achieved this feat in sporting history.

Both sports have changed radically since the 1950s when it last happened: cricket had its earliest ever start this season – April 8 – and Fulham will be playing their first match of the new campaign while Summer Solstice rituals are still winding down, and barely a month after they packed up their boots and bid farewell to colleagues for another end of term.

There was a time when a man could strap on his cricket pads in the optimism of spring and replace them with shin pads as the nights started to grow longer. Arthur Milton was one of them. In fact, the Gloucestershire batsman and Arsenal winger was the last of the Double Dozen.

Could there have been a more popular man to bring an end to a cycle that started with Alfred Lyttelton in 1880? As Mike Vockins reminds us – to the point of tedium – Milton was a modest and unassuming man who was liked by everyone.

I do not hold the constant repetition against Vockins, for 30 years the secretary of Worcestershire County Cricket Club and one of the more respected administrators in a sport that in recent years has had so many disreputable people in positions of power that Sepp Blatter, almost, and I state again in italics, almost appears palatable.

Vockins has written a most magnificent biography of Milton, which brings out the sporting qualities and personal amiability of its subject. But is it a biography? I would call it a superb work of journalism.

As Vockins writes in the opening chapter – which is preceded by a foreword from Gloucester’s finest man of letters, Frank Keating: “Gentle Arthur was one of the giants of my boyhood” – he was asked by Milton to collaborate on a book. Sadly, Milton died (in 2007, aged 79) while Vockins was still coaxing his life story out of him. But, finally, four years later that story can be told, and Milton feels ever-present throughout, as Vockins seamlessly reports the double international’s own words. I cannot believe a better book would have emerged had he lived to see its publication.

Surprisingly, because he was Bristol-born, it was the London part of Milton’s career that came calling first, when he joined Arsenal soon after the Second World War, having played some matches for the Gunners as an amateur during the hostilities. It was a good choice, as Arsenal were already accommodating something like half-a-dozen stars who also played the summer game.

Milton joined his beloved Gloucestershire not long after and lived his dual life for six years before deciding to concentrate on cricket full-time. By then he had won his solitary England cap, against Austria at Wembley in 1951, after just 12 first-team matches for Arsenal.

However good he was, jinxing down the right wing, setting up teammates with his accurate crossing, playing both football and cricket took its toll, and he decided to concentrate on the summer game while still fit enough. As for England, they had someone called Stanley Matthews who kept Milton on the sidelines.

So, after a brief stint helping his home-town club Bristol City win promotion, cricket it was, and Milton stayed a Gloucestershire fixture for almost the next two decades, embracing the new one-day formats that emerged during that time, having won the first of his six England cricket caps in 1958 at the age of 30.

A slender, blond, boyish figure, Milton was an excellent opening or middle order batsman, a dangerous fielder close to the wicket with a trusty pair of hands (760 career catches), who thoroughly enjoyed the occasional bowl. It is speculated that his lack of ambition was what made his stats less impressive than they could have been.

Despite his 16 centuries at Bristol, he was never happy with its slow track. Having seen him play at The Oval during the 1960s, it can be safe to assume his back-foot game would have been far more comfortable on a pitch with some pace in it. It would also have assisted him on his one Ashes tour to Australia, where he had difficulty adjusting to bouncier wickets (and possibly would have helped him avoid the fractured middle finger that cut short his trip).

When his career was over, Milton coached at Oxford University, helping along the way Vic Marks, Chris Tavaré and Andrew Wingfield Digby, although it was an uncomfortable role for such a naturally gifted sportsman who was concerned that players could be over-coached. Milton had captained his school at football, cricket and rugby, was a fine golfer and snooker player, as well as being an expert on the greyhounds, a pasttime that would often have him going to the “office” to lay a bet, something he did for the first time at “about 10 or 11” years of age.

He regretted, though, not going to university (which he was clever enough to have done) and having a profession (a quantity surveyor?). Saying that, he was delighted when a friend recommended he join the Post Office, and his 10 years as a postie were some of the happiest of his life (“It made me a better person”). After having to retire, he took on a newspaper round so that he could continue cycling around the countryside meeting new people on his rounds.

Milton’s retirement from cricket finally gave him the time to spend with his wife and three sons and, eventually, his grandchildren. That is, when he wasn’t on the golf course or at a greyhound meeting.

The book has some factual errors (Thierry Henry, not Patrick Vieira, wore the Arsenal No 14 shirt and Yorkshire, not Surrey, were the champions when Milton started his captaincy of Gloucester in 1968), but they are not fundamental to the story, and what a wonderful story it is. Milton would have been proud and, I’m sure Vockins would tell us, embarrassed at the result.