The England and Wales Cricket Board today announced the winners of the fourth annual County Cricket Journalism Awards which recognise outstanding contributions towards the coverage of domestic cricket during the county season. 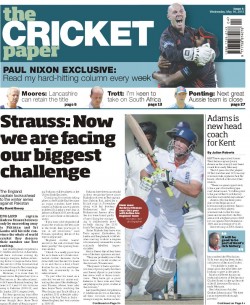 Vithushan Ehantharajah, who covers county cricket for Cricinfo was named the Christopher Martin-Jenkins Young Journalist of the Year. He was also commended in this category last year and receives a £5,000 prize which is supported by The Times newspaper.

Richard Rae, who commentates on Leicestershire’s matches for BBC Radio Leicester, won the Christopher Martin-Jenkins County Broadcaster of the Year award. He also receives a £5,000 prize which is supported by ECB.

National Newspaper of the Year: The Cricket Paper

Regional Newspaper of the Year: The Yorkshire Post. Commended: The Northern Echo

The judging of the awards was conducted by a panel comprising the Chairman of the Cricket Writers’ Club, Mark Baldwin, Pat Gibson of The Times, the former Evening Standard and Press Association cricket correspondent David Lloyd, and the ECB’s Director of Media Communications, Colin Gibson.

The judging of the Christopher Martin-Jenkins County Broadcaster of the Year award was conducted by Peter Baxter, the former producer of BBC Radio’s Test Match Special.

ECB’s Chief Operating Officer Gordon Hollins said: “The print, online and broadcast media play a vital role in the wider promotion of our domestic game and we were delighted to see such strong competition for this year’s awards across all categories. We congratulate all our winners and also thank The Times once again for supporting the Young County Journalist of the Year award.”

Chairman of the Cricket Writers’ Club Mark Baldwin added: “The awards are designed to recognise outstanding coverage of county cricket and there was no doubt, as in 2013, that The Cricket Paper produced the most comprehensive and consistent coverage of every level of the domestic game.

“ESPN Cricinfo was also without peers in the Online category, particularly impressing with the depth and breadth of its domestic coverage across multi-media platforms despite operating within tight budgetary constraints.

“It was most heartening to see the strength, and depth, of the field in the Christopher Martin-Jenkins Young Journalist of the Year award, and Vithushan Ehantharajah can be proud of his achievement in coming out on top in this category.

“I would also like to congratulate Richard Rae on heading a similarly-competitive Christopher Martin-Jenkins County Broadcaster of the Year field, while The Yorkshire Post was a deserved winner of the Regional Newspaper of the Year award by rising to the challenge of chronicling Yorkshire’s triumphant County Championship campaign besides providing outstanding all-round coverage.”