Brian Scovell has a wealth of cricketing stories, from Broadhalfpenny Down to Lord’s, and he has committed them to a memorable book, writes IAN COLE

No sport produces a good story quite like cricket. Whether you are beside a duckpond in the shires or in the Long Room at Lord’s, the air will soon be full of tales of the unexpected. 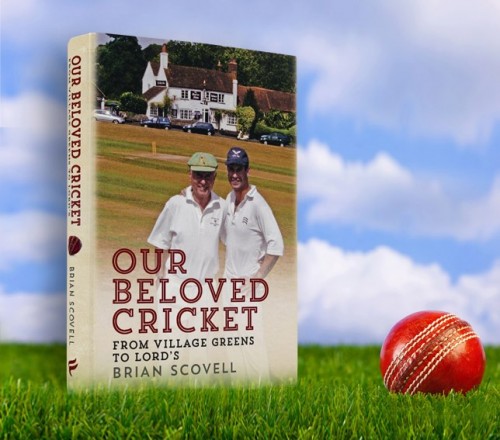 Sportswriter Brian Scovell has spent a lifetime at both ends of that spectrum, collecting dozens of cricketing anecdotes which he has been persuaded to put into print in Our Beloved Cricket.

When he wasn’t covering cricket or football for Associated Newspapers (first the Daily Sketch and later the Daily Mail), Scovell was busy coaxing his friends and colleagues into playing for his raggle-taggle team of wanderers, the Woodpeckers. The team would turn up anywhere they could find a pitch and some opponents, from Broadhalfpenny Down to Dulwich College to the Nursery Ground at Lord’s. To label the Woodies “raggle-taggle” is perhaps unfair, though. Some players were borrowed from cricket’s hall of fame.

Therein lies the beauty of cricket. Retired Test players who have a genuine love of the game willingly turning out on a village green to risk being bowled by some precocious schoolboy or clouted out of the ground by the local blacksmith.

Scovell mixes with them all and revels in the social scene. But make no mistake, he’s in charge. He captains the side and opens the batting despite the handicap of a stiff knee, the result of an accident during a German air raid on his home on the Isle of Wight towards the end of the Second World War..

Scovell reckons he has played cricket in 24 countries and on more than 500 grounds. His travels take him to Australia, India, the Caribbean and Africa, wearing the touring caps of the Maltamaniacs, the Stoics and the Forty Club.

Scovell possesses either a remarkable memory or a very deep notebook, because the stories are endless and make a fascinating read for anyone who has played the game – at whatever level.