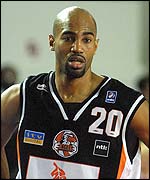 Newcastle Eagles duo Joe Chapman and Fabulous Flournoy, pictured left, have been named as the Player and Coach of the Year by the newly formed Basketball Journalists’ Association.

The awards come at the end of the 2009-10 season in which the Tyneside outfit secured the double of winning the British Basketball League and BBL Trophy.

Sheffield Sharks centre Tafari Toney has won the Pete Jacques Trophy for Best British Player in the BBL, while Chicago Bulls forward Luol Deng has been named International Player of the Year for the Great Britain star’s performances in the NBA.

Chapman claims the Player of the Year prize despite being Newcastle’s sixth man for much of the campaign. The American edged out Sheffield’s Mike Cook and Glasgow’s Rob Yanders in a poll of media who regularly cover the domestic league.

Flournoy picks up Coach of the Year for guiding the Eagles to a fourth league title in five years, beating Sheffield’s Atiba Lyons (second) and Cheshire’s Paul Smith. The New York-born player-coach has now spent seven seasons at the helm but club chairman Paul Blake admits his initial hiring was based solely on a hunch.

“Hiring him initially was a risky decision in some ways but I saw something in Fab the year before that made me think this guy could be the next Chris Finch or Nick Nurse,” said Blake. “It was clear he had that character but we didn’t know if he understood the Xs and Os. But eight years later, it’s clear he has an absolute command of it.

“The only reason we’ve not seen the full scope of his abilities is that I keep putting him in the difficult position of continuing to be a player as well. But I’m keen to get to a position where Fab can retire and focus exclusively on coaching.”

Toney averaged 16.3 points and 9.7 rebounds to help Sheffield lift the BBL Cup in January before the Sharks missed out on the league crown on the final weekend of the season.

The Great Britain cap narrowly beat out Newcastle’s Darius Defoe for the Pete Jacques Trophy for the leading British Player in the BBL. The award has been newly named in honour of much-respected basketball journalist Pete Jacques who died last month.

“Pete was a good guy so I’m honoured to get this,” said Toney. “It’s been a great season even if I’m disappointed that we’re not in the playoff final. Sheffield has been a fantastic club. This is a fantastic league. I feel the role that Atiba (Lyons) has given me this season has helped improve me a lot offensively. But I’ll see what my options are this summer before I know where I’ll play next year.”

Luol Deng takes the International Player of the Year award after helping the Chicago Bulls reach the first round of the NBA play-offs. The Londoner, who is expected to feature for Great Britain in this summer’s Eurobasket qualifiers, finished just ahead of Unicaja Malaga’s Joel Freeland in the voting with the University of Washington’s Matthew Bryan-Amaning in third following his impressive performances Stateside in March’s NCAA Tournament.

For enquiries regarding the Basketball Journalists’ Association, email: bjauk@britball.com