Edward Payson Weston’s place in history as the first transatlantic sports superstar has been largely forgotten. Yet Weston deserves to rank alongside such giants as Muhammad Ali, Jack Nicklaus and David Beckham in the hall of sporting fame. 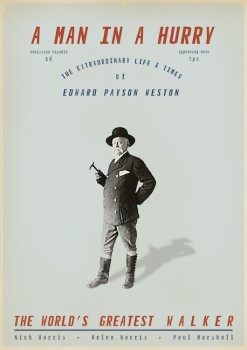 In an Olympic year, A Man In A Hurry: The Extraordinary Life and Times of Edward Payson Weston, by Nick Harris, Helen Harris and Paul Marshall is a timely reminder of Weston’s amazing feats in a pre-motor car age when fame came measured in column inches rather than television exposure.

Nick Harris, chief sports news correspondent of the Mail on Sunday and twice the SJA Internet Sports Writer of the Year, needed help from his wife Helen and historian Marshall to piece together the comprehensive and riveting story of a man who rubbed shoulders with royalty, presidents, thieves and knaves in his remarkable career.

Weston was born in Providence, Rhode Island, on March 15, 1839 but went on to become just as famous in England as in his homeland. In an era when baseball and basketball had yet to dominate American sport and organised league football was still years away in England, Weston’s passion for long-distance walking propelled him to the top of the sporting tree on both sides of the Atlantic.

Weston was unwittingly launched on this long road by Abraham Lincoln. Weston bet a friend that Lincoln would lose the 1860 presidential election, and his forfeit was to walk 478 miles from Boston to Washington to attend Lincoln’s inauguration. He did so in 10 days.

Showing similar incredible stamina Weston went on to complete a series of amazing long-distance walks either on the rutted, dangerous roads of the day or on stadium tracks of little better quality, whether in New York or London.

Former journalist Weston had a love-hate relationship with the press on his way to becoming champion walker of the world. American papers poured scorn on his achievements and sometimes cast doubt on their validity. A whiff of scandal and corruption surrounded many of Weston’s performances.

He made a living challenging rivals for cash as pedestrianism established itself as leading sport of the day. Rich backers offered their support, he wrote newspaper columns, sold autographed pictures and pamphlets and had many a side bet on his own races.

Weston’s achievements are too many to list but he could walk 80 miles without stopping, rest for 20 minutes then return for more. He made a 5,000-mile walk criss-crossing Britain in 1884 and in May 1910 completed a 3,100 mile walk across America from California to New York in 77 days. He was aged 71 at the time.

In between, Weston’s career was marked by ups and downs. He won and lost fortunes and his obsession with pedestrianism helped cost him his marriage.

Yet he was adored by the crowds. Thousands would turn up every day at the Agricultural Hall, Islington, to watch Weston walk around the track against leading challengers for five successive days.

No wonder they adored him. Showman Weston walked in a uniform of buttoned-up frock coat, tall hat, knee length boots and trousers. He carried a gold topped stick with which he whipped his tiring leg muscles back into action during races. And he frequently waved or spoke to supporters during races.

One of his secrets was whisky. Not to revive the inner man, but used liberally to lubricate his feet.

This is a story that has everything including love, drugs, money and celebrity as well
as sporting excellence, and has been superbly put together by the co-authors. Hopefully the meticulously-researched book will ensure Edward Payson Weston’s name is no longer ignored when it comes to discussing the world’s greatest sporting superstars.