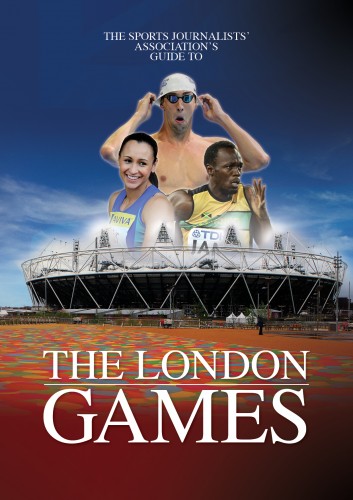 A 64-page colour magazine that features the work of some of the Sports Journalists’ Association’s most admired writers and photographers is now available, free-of-charge, to the media based at the Main Press Centre in London’s Olympic Park.

Produced by a small editorial team of Randall Northam, designer Chris Hill and Steven Downes, sponsorship from Arcelor Mittal has ensured that the biggest marketing exercise in the Association’s history has been carried out at almost nil cost, while reaching out to colleagues from around the world who are working at the Olympic and Paralympic Games.

The magazine is being distributed from the Help Desk in the MPC thanks to help and support from Jackie Brock-Doyle, LOCOG’s media director.

Its contents include a series of facsimile pages from national newspapers going back more than 100 years, to the first time London staged the Olympic Games, plus an extensive survey of media facilities at a range of Games venues, compiled over the past year by Philip Barker.

There is also an in-depth interview with LOCOG chairman Lord Coe about the Olympics and the role of the media, written for the SJA by five-time Sportswriter of the Year, Patrick Collins of the Mail on Sunday. Committee member Janine Self has written a fascinating profile of the BBC’s head of sport, Barbara Slater, which reveals the Slater family history of competing at the Olympic Games.

Other contributors include Norman Giller, Anton Rippon – who interviewed a current SJA member who joined the Association in 1948, just after London last staged the Olympics – Alan Hubbard, of the Independent on Sunday, and The Sun‘s Colin Hart and cartoonist Kevin Macey, whose work illustrates a piece by the Daily Mail’s Neil Wilson about how technology has transformed in th past three decades, and transformed our work as a result.

All pictures have been provided to the SJA by Getty Images, whose Neil Loft is thanked for his tireless picture research.

The magazine is exclusively available to accredited Olympic journalists, but copies will also be provided to those attending the special service and reception for international media being staged on Tuesday, July 24, at St Bride’s Church. Full details of that event and how to book a place – there are a few places available still for SJA members and non-accredited media – can be found by clicking here.