The Torch Relay is on its final lap. Tomorrow, in Uxbridge, SJA member PHILIP BARKER runs a leg of the relay – a suitable honour for the author of the latest book on the history of the Olympic Torch. Here we publish an extract that looks back to the last time London hosted the Games 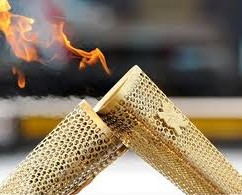 London had originally been chosen to hold the 1944 Olympic Games. But they never took place because of the war. London did get its chance in 1948, chosen by postal ballot. Time was short, war damage was still highly visible and there was strict rationing of food, petrol and other goods. Defeated powers Japan and Germany were not invited, but organisers decided one of the great innovations of the 1936 Games in Berlin should be retained: “The Olympic Torch Relay… had a great symbolic value to the Olympic Games, and that although considerable expense would be involved, it should be included in plans.”

Former Royal Navy officer, Commander Bill Collins, was put in charge, but soon faced opposition. One newspaper wrote, “The British public concludes that quite apart from the bad experiences of the past – an event based on such antiquarian sham and portentous symbolism is out of keeping with the spirit of the problems of the post war world and can contribute little to its prestige.”

Collins wrote to complain. Features editor Charles Curran responded. “I agree there is a great deal to be said for the opinion you express so forcibly…the carrying of the flame is a desirable piece of symbolism.”

Of the exchange, Collins later told a colleague: “Those pressmen can be the very deuce when the wrong chap reads what they say.”

The flame was to travel by sea for the first time. From Greece to Italy to begin the main European portion of its journey overland. Later at Calais, it would cross the Channel. Former naval person Collins approached his old employers for help.

The admiralty was unenthusiastic.

“To arrange a journey specially for this purpose would be quite out of the question at this time of financial stringencies. Whilst it may be politically desirable to provide transport between Greece and Italy, there seems no reason why the cross channel steamer should not be used from France to England.”

Collins was furious and threatened to approach the French, Italian or Greek navies . This sent panic through the Admiralty.

“The necessary reservations about the circumstances at the time should be worded so as to avoid any impression that we grudge what is asked or any danger of an approach to another nation.If we do grant facilities, I feel they ought most certainly to include the last lap. The effect produced by transport in a warship from Corfu to Bari would surely be destroyed by that of conveyance in a railway steamer from Calais to Dover,” said a memo.

Collins had beaten the Sea Lords!

The 1948 Olympic torch itself was 18 inches high, made of aluminium and inscribed “London XIV Olympiad With thanks to the bearer”.

But who should light the cauldron at Wembley?

The popular choice was 1946 European 5,000m champion Sydney Wooderson. His club, Blackheath, had in fact been assigned a leg of the relay. Club captain Dick Choat recalled: “I thought only one person was obvious. I went along to Sydney Wooderson. He said, ‘Oh no, I wouldn’t want to do that.’ He was a very retiring man, he wouldn’t do it. ”

The bespectacled Wooderson did not look like an athlete and the organisers were determined the final runner should “look the part”.

“He (The final runner) is already chosen…we have tried to find the perfect Englishman. He is six feet three and blond,” wrote the Daily Herald’s Clifford Webb after an interview with organising chief Lord Burghley.

The man chosen was John Mark, a St Mary’s medical student. A quarter miler at Cambridge, and a member of the Achilles Athletic Club.

“It is all part of a play and it requires a certain amount of acting to make it work,”wrote Collins to Mark.

Collins headed to Greece to oversee the final arrangements.

At the previous torch relay, there had been festivities in both Olympia and Athens, but the country torn apart by political unrest. Guerrillas threatened the relay.

The designated priestess was unable to reach Olympia from Athens, so Maria Aggelakopoulou from nearby Pyrgos lit the flame.

The first runner was Greek soldier Corporal Konstaninos Dimitrellis, who symbolically laid his uniform down before crouching to receive the flame.

The Torch left Greece from a nearby port and at Corfu boarded HMS Whitesand Bay for its passage to Bari in Italy.
“During the passage that night which was bumpy, the captain twice rang me in my cabin for information on the flame,” said Lieutenant Frederick Clark, the officer in charge.

In Bari. an Australian Air Force Cadet called H Potter brought the flame ashore – in his own “goblet of fire”. Italian Cadet Mario di Cesaris was next. Collins had been worried that there would not be enough runners in Italy but the flame reached the Swiss border ahead of schedule.

The journey was under the watchful eye of official Sandy Duncan, who travelled in a Rolls Royce.

In Lausanne, it was greeted by the widow of Baron Pierre de Coubertin. Then onward through Luxembourg, Belgium and France (the route avoided Germany).

“The bloody thing kept going out and then rekindling itself. It was a spring loaded candle,” he said. “We stepped inside a car to relight it , because we were carrying a spare light and an oil can in the back.”

With the message “God Speed” Barnes handed the flame to the first Kent runner, 39-year-old Sidney Doble, butchery manager of a Co-operative store in Dover. “I’m training on the smell of steaks and doing a bit of running and cycling in the evenings.” (Steaks were rationed at the time.)

The relay was scheduled through the night but this did not put off spectators who lined the route.

“Some had brought out chairs and beds to the roadside and many were in dressing gowns.”

By the time it reached Guildford the following morning, there were nearly five miles of traffic behind it.

Approaching lunchtime, it arrived in Windsor. The runner was met by Mayor Alderman Fred Fuzzens who promptly lit a cigarette from the flame.

Outside Eton former international runner, Sidney Binfield, an engine driver on the Great Western Railway found that heat and smoke of a different kind caused him trouble. ”It was very difficult to change hands because of the fumes,” he said.

Binfield did what came naturally when he’d finished carrying the torch. He went out for a run. “Running and his allotment are the only things he lives for,” his long-suffering wife told a newspaper.

By the time it reached Uxbridge it was actually four minutes early.

Amongst the vast crowd were a group of spectators who’d seen something similar before. They had watched the 1908 Olympic marathon pass by.

At Wembley, the Opening ceremony was already under way.

King George VI made the opening proclamation and John Mark entered with the torch.

“As soon as I entered the stadium I felt grand. I didn’t even feel hot,” he said later.

Philip Noel Baker MP, described his progress. “Tall and handsome like a young Greek god, he ran in perfect rhythm around the track.”

Mark remembered what he’d been told by Collins, and became an “actor” pausing for dramatic effect before lighting the cauldron.

Mark celebrated quietly with family and friends after the ceremony and even had to hand back his pass for Wembley. He never did compete at the Olympics but did become a doctor.