From London 2012
In exactly three years, people around the world will be

celebrating the Opening Ceremony of the London 2012 Olympic Games.

Competitors, including new diving world champion Tom Daley, will see first hand the progress of the venues they will potentially be competing at in three years time.

The athletes will travel to the Olympic Park on what will become the “Javelin” train service at Games-time in the first time-trial of this train between St Pancras International and Stratford International. Boarding the Javelin Service from St Pancras, the train will take athletes and dignitaries along the High Speed One track to Stratford International Station. In 2012, the service will bring up to 25,000 visitors per hour to and from the Olympic Park along this 140mph line.

With construction now well under way on all permanent venues on the Olympic Park, the ODA is on track and within budget. The external structure of the Olympic Stadium is now complete, the roof structure of the Aquatics Centre is over half way finished and work is also progressing well on the Olympic Village, the Velodrome, the IBC/MPC and the transport and infrastructure projects needed for Games and in legacy.

Todayâ€™s visit by the athletes is an opportunity for them to view this progress and take an early look at what the Olympic Park may have in store for them in three years time as they seek to compete in an Olympic Games or Paralympic Games on home soil.

The London Organising Committee of the Olympic Games and Paralympic Games has made solid progress with its planning to stage the Games in 2012, with its domestic sponsorship programme now passing the Â£500 million mark.

LOCOG has raised Â£530 million in its commercial programme, announcing 12 new sponsors so far in 2009 alone

Over 250,000 people have already registered their interest with LOCOG to be a 2012 volunteer

52 electricity pylons dismantled and the site cleaned and cleared

Total number of people who have worked on the Olympic Park to date has risen to over 10,000

Over 6,000 schools and colleges signed up to Get Set, London 2012â€™s Education Programme

Of the current 4,434 strong workforce, 1in 5 are resident in the five Host Boroughs â€” Greenwich, Hackney, Newham, Tower Hamlets and Waltham Forest â€” and over half live in London (53 per cent)

Regeneration of waterways around Olympic Park is well underway, with the freight route dredged, river walls reinforced and replaced, and a new Lock constructed, improving access, water quality and biodiversity

Transport enhancements around Olympic Park well underway, including extension of DLR service, improved access at Stratford Regional Station and Stratford International Station due to be open in December 2009

1,142 people have completed the course for “Personal Best” London 2012 Pre-Volunteer Programme, now trialled in 11 London boroughs (most graduated last October). From the earlier graduates, 42 per cent went on to further training, 33 per cent to further volunteering and 15 per cent entered work.

935 companies have already won more than Â£3.5 billion worth of work supplying the ODA. With LOCOGâ€™s procurement drive beginning in earnest this year, this is likely to rise to around Â£6 billion by 2012

London 2012 Organising Committee Chair Sebastian Coe said: â€œIn exactly three years, London and the whole of the UK will be getting ready to stage the greatest event on earth and we will not disappoint. The athletes who are visiting the Park today will get a small glimpse of the sporting stage that they â€” and we – have spent the last few years working towards.

“There is a tangible sense of excitement building and a genuine sense of belief that the Games in 2012 will not only be a source of intense national pride, but that the benefits will be felt for generations to come.â€

John Armitt Chair of the ODA said: â€œBuilding the venues and infrastructure needed for the 2012 Games and legacy is the largest construction project in Europe and three years out from the Games we are on track and within budget.

â€œThe Olympic Park has changed dramatically over the last year. The external structure of the Stadium is complete just fourteen months after construction started and with work well underway on the rest of the site people are now able to get a sense of what the venues will look like in 2012.

â€œThough we are making strong progress we are not complacent. The year ahead is a challenging one as activity on site reaches its peak.â€

Olympics Minister Tessa Jowell said: “It’s three years to go until the London 2012 Olympic and Paralympic Games and our preparations are well under way to make sure that the nation not only celebrates in style but that the benefits of the Games are felt for decades to come.

“On the Olympic Park world class venues like the Olympic Stadium and the Aquatics centre, whose construction has involved companies from right across the UK, are becoming new landmarks. After the Games they will be used by a huge range of people, from local keep-fitters to tomorrow’s sporting superstars.

“We are already using the power of London 2012 to inspire a generation of young people and motivate us all to get active. Half a million more people have taken up regular sport and we are investing to ensure more do so by 2012.”

The Mayor of London Boris Johnson said: “Nobody visiting the Olympic Park can fail to be blown away by the extraordinary engineering achievement that greets you when you arrive in Stratford. A Herculean effort by everyone on the 2012 project, from the planners to the construction workers, means we are ahead of schedule and on budget. 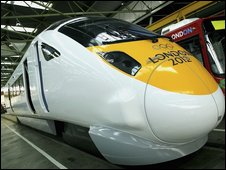 confident that in the summer of 2012 we will wow the world with a spectacular fortnight of great sport, entertainment and fun. However I am extremely proud that, even now, the world can witness the immense skills and technical expertise that is transforming a wasteland into a brand new quarter for our great city in breathtaking time.”

Colin Moynihan, Chairman of the British Olympic Association, said: â€œToday gives us all the chance to reflect on the impressive progress that has been made. Just look at the Olympic Park, and you can see the scale of whatâ€™s been achieved. When I look towards 2012, I share the optimism of both LOCOG, and the IOC.

â€œOne of the BOAâ€™s most important roles is to ensure that Team GBâ€™s athletes remain at the very heart of this project, and that these Games leave a strong sporting legacy. Thatâ€™s a task we take very seriously, and itâ€™s an ambition I know is shared by all our Olympic partners.

â€œSince their outstanding achievements in Beijing last year, our athletes are raising their game even further. The British team that we send to these Games will, I feel, be the biggest and strongest of our lifetime.â€

Janet Paraskeva, Chair of the Olympic Lottery Distributor said: â€œSo far the National Lottery has raised Â£580 million for London 2012, that’s the contribution to good causes from over 2 billion Lottery tickets. With three years to go I think we are getting excellent value for Lottery players’ money.â€

The ODA has also announced that it had delivered on and exceeded some of its â€˜The Big Build: Foundationsâ€™ milestones and has published the next set of milestones it will achieve by the summer of 2010.

The â€˜Big Build: Structureâ€™ milestones to be achieved by next summer, include:

The structure of the Olympic Stadium, including the roof will be complete, the first seats fitted and work on the field of play will have started

The Velodrome structure and roof will be complete, with work about to start on installing the timber track

More than half the new bridges and underpasses complete

Meanwhile LOCOGâ€™s focus over the next 12 months will be on:

Early details of London 2012â€™s ticketing strategy released in 2010, ahead of tickets going on sale in 2011

Appointment of further sponsors and licensees, with more London 2012 merchandise on sale

Unique 3 Years To Go images of the Olympic Stadium can be downloaded here.

The ODA recently published their next set of milestones until July 27, 2010, you can see them here