On long cricket tours overseas in the days when Sunday newspapers sent their own correspondents, Saturday evenings were a treat for the ‘daily boys’. It was a day off and an evening to make the most of.

And so ‘The Pompous Dining Club’ was formed. Alan Lee (The Times) was the organiser and Christopher Martin-Jenkins (The Telegraph) a fellow founder. They would find the most ludicrously-priced watering hole in a foreign city and book every Saturday. David Lloyd (Press Association) and I (Daily Express) were invited for tabloid balance, and Mike Selvey (The Guardian) for cricketing expertise. 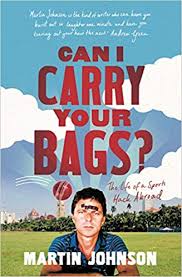 And then there was the sixth regular member: Martin Johnson. Anybody further removed from pomposity than Martin Johnson, you would struggle to find.

The order from Mr Lee was ‘smart dress’, which to Jonno (we will come on to his other nickname of ‘Scoop’ later), meant a loosely knotted tie with his polo shirt, and just one roll-up ciggy behind the ear instead of two. While Alan would be agonising over the wine list with the sommelier, Jonno would order himself a pint from any passing waiter.

The nouvelle cuisine was wasted on him but the craic wasn’t. By the end of the meal, Jonno has skewered the pomposity of the whole expensive evening with his acerbic wit and Sid James guffaws.

That’s the thing about Martin Johnson, a dear old friend who died at the weekend: he was even funnier in conversation than he was in print – and that is saying something.

As a journalist, he was a one off. He was so wittily observant that a generation of young journalist tried to copy him. Never a good idea. He was so good at his trade that people bought the fledgling Independent Newspaper just to read him.

I’m sure he worked at it, but if he did, he made it look easy. Even in his early days on the Leicester Mercury, he could make running copy from Grace Road fun to read. His savage wit was best aimed at a fallible team, and he had plenty of opportunity with the Leicestershire side of the 1970s.

The club’s chief executive, so fed up with disparaging reports in the Mercury, once asked David Gower, who was a friend, to have a word with Martin. When Gower sidled up in the bar after play, Johnson said: “If it’s about what I’m writing for the Mercury, don’t bother.”

Johnson was not a great news gatherer – hence the ironic nickname ‘Scoop’ from his Mercury days – but his unique talent was known in the trade, and when the Independent launched in the mid-1980s, they wanted him, and signed him up as Rugby Correspondent.

Martin Johnson’s priceless penchant for sports writing of incomparable humour often left us in tears of laughter. Now we shed tears of sorrow at the passing of a genius who would have given Damon Runyon a serious run for his money @RUWCOfficial @CricketMediaUK @SportSJA.

Fate, though, took a wonderful twist. With no-one in place to cover the imminent Ashes tour, Johnson was despatched with Mike Gatting’s 1986 team and after a few hapless early tour matches he wrote the immortal line: ‘There’s only one thing wrong with this England team: they can’t bat, they can’t bowl and they can’t field’.

As it happens, they went on to win the Ashes tour, but Jonno was always totally unabashed by what he had written, thank God. His laugh-out-loud one-liners were legendary.

Angus Fraser was running in ‘like a man who has his braces caught on the sightscreen.’

On Mike Gatting after he was bowled by Shane Warne’s ‘wonder-ball’ at Old Trafford: ‘How anyone can spin the ball the width of Gatting boggles the mind.’

On Merv Hughes the bellowing scourge of England batsman: ‘his mincing run-up resembles someone in high heels and a panty girdle chasing after a bus.’

He suggested during the height of the Mad Cow outbreak (BSE disease) in the 1990s, that the temperamental Colin Montgomerie was suffering from ‘Boiling Scotsman Eruptus.’

Yes, it wasn’t only cricket for Jonno. He loved his golf and rugby, and during his time at the Daily Telegraph (1995-2008) he brought his withering prose to all subjects. Then he moved on to the Sunday Times and although, a chronic back complaint and dodgy knees slowed him down, little dulled his pen.

Even at his hospice in recent weeks where he suffering from a long illness and life was pretty intolerable, his humour still surfaced.

One famous incident at the Pompous Dining Club happened in an Adelaide restaurant where the food took so long to arrive that Alan Lee summoned the maitre d to complain, flung his napkin on the floor and declared: “My man, I don’t think you realise who you have sitting around this table.”

When Jonno was asked a couple of weeks ago what life was like in the hospice, he said: “It’s really rather good, I have not had to throw my napkin down once.”

Now he has gone to join Alan Lee and Christopher Martin-Jenkins wherever it is old journos go, and, boy, will he liven up the place.

Footnote: Jonno, never one to let boring stats get in the way of a tale, would chuckle at the fact that various obits have disagreed on his age. He was around 70. That’s good enough.