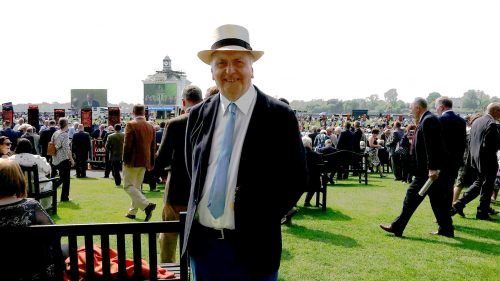 VIEW FROM THE VIP BOX: The SJA’s annual Race Day at York is beginning to be the stuff of legend. Like the myth of the day when RANDALL NORTHAM, pictured above, backed a winner

They say you learn something new every time you go to the races. If they don’t, then they should.

For instance, I learned at Wednesday’s SJA Race Day at York that the name McNally means “Son of the Poor Man” in Irish Gaelic. At least that is if you believe Brian McNally, the former Sunday Mirror columnist and pillar of north-east sports journalism. And why shouldn’t you?

Attending the SJA’s first York race days in 2014 and 2015, McNally and his wife Gill, managed not one winner. It seemed as if the “Son of the…” bit was becoming a bit unnecessary.

But this time, at a sunny Knavesmire, bravely recovering from the winter’s devastating floods, it was different. Brian and Gill finished with three winners and were able to announce that they were a grand total of £27.50 ahead.

But the story, as it always is when racing is concerned, might have been much different.

Brian and Gill were staying down in Yorkshire for a few days at a hotel just outside the city. On Tuesday night, an ex-jockey had wandered into their hotel bar. He was, in Brian’s words, “a small, ex-jockey”, which probably doesn’t narrow it down much.

After finding out that the McNallys they were going racing, the small ex-jockey told Brian and Gill to lump all their money on Frankie Dettori in the day’s two big races.

“We don’t bet like that,” said Brian. “We put a tenner on each race. Much more fun.”

The jockey was not impressed. But he was right. Dettori did win the two big races. He was short-priced in the Musidora Stakes when winning on the very impressive So Mi Dar, but the McNallys would have got 7-1 for a double if they’d coupled the bet with Magical Memory in the Duke of York Stakes.

But Brian decided not to follow his new friend’s advice. After realising what might have been, Brian did back Dettori in the next race, the Conundrum HR Consulting Stakes. And Castle Harbour came in at 9-2. And he never got that tip from the small ex-jockey.

In fact, all SJA members and their guests got the benefit of the advice from an ex-jockey. Our very well-appointed VIP box – not far away from the Royal Box – enjoyed another visit from Mick Fiztgerald, the former jockey, now a Channel 4 pundit. This time Mick led us through the card, thanks to Jon Ryan, and provided us with at least one winner. I put my money on the other horse Fitzgerald suggested.

The great thing about the SJA race day is that you can win well (my friend won £380) or lose well (I was £50 down despite two winners) and still enjoy yourself even though your racing knowledge is scant. One of our guests, for instance, wondered aloud how jockey Silvestre De Sousa could weigh 9 stone in one race and 9st 7lb in another.

It was yet another great day for the SJA. All the usual suspects enjoyed themselves and Ken Walker, with us for the first time, said that it was a much better deal than he had expected. “We both thoroughly enjoyed ourselves, and are already contemplating next year, god willing.”

My day did not go well, betting-wise. As I said I was £50 down but it would have been much worse without the advice of former SJA chairman David Walker. The Daily Mirror sports editor had been given just the one tip by his racing man, Gary Nutting. It was for Appeared in the last race. I took the advice and collected £50 for a 5-1 winner. Thanks David and Gary.

Here’s to next year.