The Sun has appointed Charlie Wyett as its chief Sunday football writer with immediate effect. 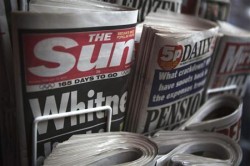 Wyett, who will be 42 on Thursday, has worked for the paper since 1996, first as a freelance sub-editor and more recently as a reporter.

He was The Sun‘s tennis writer for a decade.

This is the first time that The Sun has had a reporter dedicated to covering football for its Sunday edition since the paper went to a seven-day operation last year.

Wyett has been responsible for covering Arsenal on a daily basis but will now step away from that to concentrate on stories and features for the Sunday edition.

However, he will file live any stories which will not hold and continue to work with chief football writer Shaun Custis on the England beat.