The first time England and Australia met in back-to-back Test cricket tours, they actually staged three in a row. It was the 1880s, and the third act, in 1882-1883, was the series that followed the sports world’s most famous cremation. They have been Ashes tours ever since. 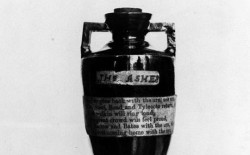 A few weeks after England lost by seven runs at The Oval, in the sole Test of the Australians’ 1882 tour, the outcome of which prompted that historic notice in The Sporting Times, the Honourable Ivo Bligh sailed for Australia . After one victory in Australia, he was given a small trophy no bigger than a pepper pot, by an Australian lady. The rest, as they say, is sporting history…

It took cricket administrators nearly 40 years, but eventually they too learned the art of delayed gratification when it came to organising Ashes Tests. From the early 1920s, Ashes series alternated between being staged in Australia or England with a decent interval between them. But in 2013, it is back to back to back again.

The last full blown series in consecutive southern and northern hemisphere summers were in 1974-1975, at an era of six-Test series and, in Australia, eight-ball overs and the touring side formally representing the MCC, wearing the elegantly coloured  sweaters and with the St George and the dragon badge on their caps. Batsmen’s helmets were still half a decade away.

For the British press in the mid-1970s, the Tests in Australia posed the usual problems, “never less than a measured 24 hours behind the cricket itself, Fleet Street echoed rather than reported”, wrote Bryon Butler in The Cricketer.

It was still an age when live sport via satellite was a rarity, and certainly not considered for through-the-night television broadcasts. The wireless – radio that is, not broadband – was how most fans in Britain followed the action live 40 years ago.

“I first heard about the world’s greatest bowler by switching on the radio. ‘Once again the damage has been done by Lillee and Thomson.’ I thought, ‘Who is this woman?’” said Richard Stilgoe. He sang about, “Lillian Thomson, Australia’s finest flower, a maiden bowling overs at a hundred miles an hour”, on BBC television’s Nationwide. Incidentally, the Aussie women’s team did have a Thomson, but her name was Raelee, not Lillian.

John Woodcock of The Times was angered by “some unedifying remarks made by Dennis Lillee on television”. Jeff Thomson did not escape. “He enjoys felling a batsman with a good bouncer. This is the talk of the underworld, not of Test cricketers.”

Keith Miller, the veteran Australian all-rounder and a war-time pilot not easily scared, told the Daily Express: “Tornado Thommo even frightened me, sitting some 200 yards away.”

The Australians claimed England had started the bumper “war”. Tony Greig certainly set out to goad them. In the first Test at Brisbane, he hit 110, signalling many of his 17 boundaries himself, but Mike Denness’s England still lost the match.

As well as taking wickets, “Lillian Thomson” had taken a toll in other ways: England openers Dennis Amiss, John Edrich and David Lloyd would all suffer broken hands, among other injuries, while Keith Fletcher had a badly bruised arm; Bob Willis, England’s main strike bowler, had a groin strain and Peter Lever had strained a side muscle.

England sent for reinforcements, Denness opting for his former Kent county captain, Colin Cowdrey, now 42 and four years since he had last played in a Test match. Cowdrey, who had first toured Australia 20 years earlier, was cruelly portrayed in the Daily Mail, Jon’s cartoon showing him with an ear trumpet. Selective deafness would have been an advantage when Cowdrey offered to shake hands with Thomson. Sledging had arrived.

“That’s not going to help you fatso, piss off,” Thomson is reputed to have said when greeted by English cricket’s urbane elder statesman.

“You knew they’d been at each others’ throats, but you couldn’t believe it was this uncompromising, this violent or this uncouth,” Ian Wooldridge wrote.

Geoffrey Boycott had been England’s batting hero in regaining the Ashes in 1971. But he was “unavailable” after the first home Test against India in 1974. Lancashire’s David Lloyd seized his chance, 214 not out at Edgbaston put “Bumble” on the plane for Australia.

As if Brisbane had not been bad enough, the second Test was at Perth, on the Wagga’s notoriously hard and fast pitch. Protection for batsmen was minimal . According to Woodcock in The Times, “Lloyd retired hurt after he was hit in the stomach.”

Two Tests down – Melbourne was a draw – by the fourth Test in Sydney, captain Mike Denness dropped himself, but the Ashes were gone. England did the win the sixth and final Test by an innings, on the one occasion in the series when their batsmen did not fail, amassing a first innings total of 529 with the re-called Denness scoring 188 and Fletcher 146. Tellingly, though, Thomson was injured and Lillee broke down.

On July 10, 1975, straight after the success of the first ever cricket World Cup where Australia lost a thrilling final at Lord’s to the West Indies, Ashes hostilities resumed at Edgbaston, with the BBC’s television coverage shared with the Open golf. Captain Denness won the toss and put Australia in to bat, the final misjudgement of the Scot’s captaincy of England. After Australia accumulated 359, England’s batsmen were skittled out in their first innings for 101, Max Walker and Lillee sharing the wickets, Lillee being virtually unplayable as he took five for 15.

Most were critical when England lost that opening Test by an innings but not the Telegraph’s Michael Melford: “Best wishes to all those including myself who in pub and power station, sauna bath and supermarket, go on captaining England impeccably from a distance and with hindsight. It is a difficult job, but thank heavens our prescience, powers of leadership and spirit of aggression are up to it.”

Denness departed and Sussex’s South Africa-born all-rounder Greig was installed in his place. Greig told The Guardian’s Henry Blofeld, “I know as well as anyone that Mike has done his best. I do have the advantage of being sure of my place in the side.”

England drew the second Test at Lord’s after Greig had called into the side the hitherto obscure Northamptonshire batsman David Steele to make his Test debut at the age of 38.

The Sun’s Clive Taylor captured the bespectacled No3 batsman as, “The bank clerk who went to war.” Lillee took the first four wickets and had England at 49 for four, but Steele’s half-century helped to shore-up the middle order, where Greig scored 96 to reach a respectable 315 total.

Denis Compton was gleeful as Steele hooked Lillee again and again. “This is what all of England has been waiting for,” Compton wrote. Television coverage made Steele a household name, and a butcher supplied him with a chop for every run scored. He made 365 in the series.

“No Test has ever received wider coverage than the third at Headingley,” was Woodcock’s verdict when the match was abandoned without any play on the final day after demonstrators poured oil on to the pitch. They were protesting the innocence of one George Davis, in gaol for taking part in a robbery. As rain prevented play in any case, Wooldridge observed “all they had done was to hijack an aircraft that was going to Cuba anyway”.

After four days’ play, thanks to Steele’s innings of 73 and 92 and spinner Phil Edmonds taking five first-innings Australian wickets on debut, England had an outside chance of levelling the series. The BBC’s Peter West called the pitch vandalism  “one of history’s most diabolical acts”, and he interviewed the two captains for television. The Beeb then went off air. The news bulletins reported the story thereafter. The Times even brought in their crime correspondent .

Wisden noted gravely, “following this outrage, it was obvious in future much greater vigilance would be necessary.” When Davis’ conviction was eventually overturned in 2011, it received as much coverage as the original story.

Ticket sales apparently went well for the fourth and final Test at The Oval, but to judge from television pictures there were still plenty of empty seats to be seen, especially on the sixth day, added in those days when the series was still in the balance. The only suspense was whether England could force a draw after following on. Bob Woolmer’s maiden Test hundred was a highlight but England’s second innings lasted almost three days.

The final Test of the 2013 Ashes series at The Oval will be only five days, but it is a guaranteed sell-out on each day, one of the hottest tickets of the summer. If the series outcome still hangs by a thread into the fifth day, as it did before Michael Vaughan’s England regained the Ashes in 2005, then the spectators who are paying upwards of £90 for their tickets may just about get their money’s worth.

And afterwards, the two sides will pack up their kit bags, sort out some laundry, take a brief break before, a few months later, starting all over again back at Brisbane. Back-to-back series could run and run.