Local newspapers are to be allowed to publish the results of junior football matches. The Football Association says so. 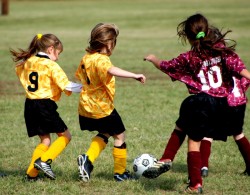 Last year, the Surrey Mirror received a letter from its county FA “advising” the paper to stop printing the scores of games featuring players under the age of 11.

Surrey County FA’s chief executive, Caroline McRoyall, said publishing them is “detrimental to the development of the player and the game”.

The cudgel was taken up by the Society of Editors’ executive director, Bob Satchwell, who wrote to Greg Dyke, the FA chairman who started out in his working career as a local newspaper journalist.

Now the FA’s chief executive, Martin Glenn, has responded from his Wembley office.

“We agree that local newspaper sports pages play a vital role in documenting positive achievement of young people often against the tide of reporting elsewhere in the media but it is also the FA’s responsibility to ensure that youth football is presented in a form that is enjoyable, child-friendly and hopefully sparks a lifetime love the game,” Glenn’s letter said.

Glenn also said that while the FA did not ban reporting of youth games, extensive feedback had called into question whether publishing results and league tables over a 26-week season was the best way to recognise the achievements of youth teams.

He said that the FA is asking editors to consider its concerns when publishing results and to note that those involved in youth football are given the opportunity to take part in a series of regular cup competitions of which the sporting body encourages “full and thorough” match reporting.

“It is important to note that we do not discourage match reporting outright. We agree, individual achievements should be celebrated, but we just ask for sensitivity around the results and performance rankings.

“Ultimately it is the discretion of sports editors that will determine whether youth league results and league positions are published.

“Our wish is for football to be progressive and child-friendly and to move away from the win-at-all-costs mentality that has been recognised to stifle development and enjoyment in sport.”

Meanwhile, Bob Satchwell has asked regional FA representatives to contact their local editors to explain the guidance and the reasons behind it.

He said: “Encouragement of football at every level and the healthy, friendly rivalry that it engenders is an interest which should be a shared aim of the media and football authorities.

“I am sure you would agree that partnerships have to be developed and nurtured by positive two-way communication between those who share similar interests on the success of the game at every competitive level.”