Archant, the publisher of a series of newspapers in East Anglia, is to broadcast Norwich City football matches live on its television station. 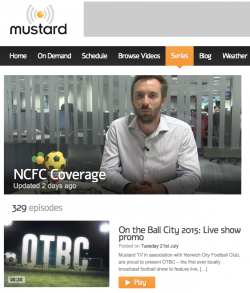 Mustard TV, which was launched by the Norwich-based regional newspaper and magazine publisher in March last year, tells prospective viewers that it is “your hub for everything that matters in the fine city of Norwich”.

Mustard (viewable on Freeview Channel 8) has signed a deal with newly promoted Premier League Norwich City to show full live coverage of two pre-season friendlies, against West Ham United on July 28 and against Brentford on August 1.

They will be part of Mustard’s On The Ball City Live football show. Both broadcasts will be sponsored by Pleasurewood Hills, a theme park in Suffolk.

Romily Broad, head of content at Norwich City FC (yes: football clubs have heads of content these days), said: “This is an exciting partnership with Mustard TV and will provide those fans who are unable to join us at Carrow Road for the games the opportunity to watch Alex Neil’s side in action.”

How many Canaries fans will save themselves the entrance money and tune-in instead? When its first set of figures was released in June last year, Mustard TV claimed a 20 per cent reach, the equivalent of 96,000 people in and around Norwich.

How many are actually watching seems less certain, though.

In March, when recording a link that was not intended to be broadcast, presenter Helen McDermott used the c-word to describe her colleague Darren Eadie, the former Norwich player. Nobody called in to complain.