A little bit of newspaper history returns to Oldham this evening. 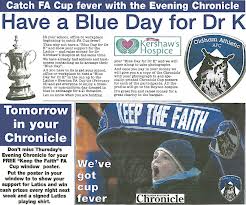 Within minutes of the final whistle of the FA Cup fifth-round replay between Oldham Athletic and Everton at Goodison Park, copies of the Evening Chronicle’s “Green Final” edition will hit the streets of Oldham.

It’s 40 years since Latics fans last had the pleasure of reading about their club’s fortunes in that special sports paper.

But when fleets of coaches disgorge thousands of supporters back in the town at just after 11pm – give or take extra-time and penalties – newspaper sellers will be waiting to greet them.

The 16-page edition, which will have a print run of 5,000 copies, will be distributed first to 24-hour supermarkets and then to selected newsagents to catch morning commuters.

Tomorrow’s main edition will also contain a 12-page supplement of analysis and reaction to the match.

Chronicle Editor David Whaley told the HoldTheFrontPage website: “There is always a great buzz around a town when the football club gets on a run like this and we have been pleased to play our part to feed the cup fever.

“Our editorial team is only small in number but they have been brilliant in taking on extra work and extra shifts at short notice for the good of the newspaper and that makes me very proud.

“These are tough times in regional newspapers and anything that can provide a circulation spike or additional revenue has got to be worth going for.”

The Chronicle is printed on Trinity Mirror presses at Hollinwood, near Oldham, and Trinity Mirror Print have sourced the green paper that will be used for the special edition.

What a pity it will be only a one-off – unless, presumably, Oldham achieve the unexpected and nick a result at Goodison – because those Green ’Uns and Pink ’Uns, with their almost impossible deadlines were great fun to work on. Ask any sports journalist that still pines for a manual typewriter and the right to smoke his way through a packet of Woodbines while in the work environment.

Last time I looked, only Sheffield, Southampton and Sunderland still produced Saturday evening sports editions. It used to be four, but last October the Sports Mail in Portsmouth rolled off the presses for the final time. In an age of instant sports results, via video screens on smart phones and tablets, with minute-by-minute match reports offered by a range of broadcasters and national newspaper titles’ websites, the local newspaper’s printed efforts can rarely compete.

When the Sports Mail closed, its chief sports writer Neil Allen wrote: “It’s a funeral I have attended before … Now I have bid an emotional farewell to another much-loved friend.” In 2006, Allen had witnessed the closure of Birmingham’s Sports Argus.

Of course, even the survivors all have to boast a digital presence these days. For instance, the Southern Daily Echo’s The Pink is also available “on your iPad, iPhone or iPod Touch or on your PC or Mac or your Kindle Fire tablet”.

Today, there is no need to hang around the newsagent’s because “every Saturday night the Pink will be delivered automatically to your Apple device, meaning you don’t have to lift a finger”. And, of course, there has to be a Twitter account.

All this sees the end of a little bit of social history. Fans used to wait anxiously for that Saturday teatime van to arrive, often to read about a game they’d just watched. Opinions were exchanged. Nowadays it’s all done on radio phone-ins.

Of course, even setting aside digital possibilities, what has helped to kill the Saturday evening sports editions is the fact that no one can look at the fixture list at the start of a season and guarantee kick-off times, or even match days. Many Premier League and Championship clubs can go for weeks without a 3pm Saturday start. Which renders a Saturday sports special rather pointless.

Writing in The Guardian in 2006, in the wake of the Bristol Evening Post’s Green ’Un’s demise, the late Frank Keating summed it up perfectly (well, he would have, wouldn’t he?): “Once upon a time, Pinks and Greens speckled the land. Even in my boyhood’s cuddly Cotswold village of the 1940s, us foot-stamping addicts would gather in the after-tea gloom at Stonehouse post-office, expectant for the van with the Citizen Pinks from Gloucester; sometimes, for a double fix, we’d then leg it across to the LMS station where a quire of Bristol Greens would be slung from the passing train.”

And now, in Oldham, for one night only …