Newcastle United fans’ pleas for a local newspaper to support their plans for a boycott of this Sunday’s Premier League match against Tottenham Hotspur have failed to persuade The Chronicle, the paper which was banned by the club for 14 months, Anton Rippon writes.

Supporters organised the boycott after it was revealed that United had more than £34 million in its bank account at the end of its last financial year and after it recently announced a record annual profit of £18.7 million for 2013-2014. The fans want to see the money used to strengthen the squad, after another trophy-less season. 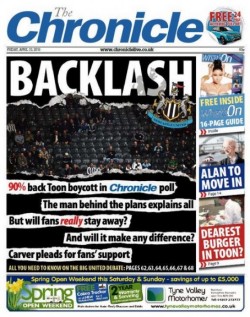 Supporter Steve Jackson said that after hearing George Caulkin of The Times giving passionate support to supporters protests against the club’s owner, Mike Ashley, the local media was “duty bound” to follow suit.

He wrote to The Chronicle’s owners, NCJ Media: “As a Newcastle fan I just wanted to say how disappointed that I am to see that The Chronicle is not backing the Boycott Spurs campaign. I understand that you have reported the existence of the campaign but – as you are aware – that is not the same as giving it your official support.

“The most successful spell in recent years happened as a direct result of The Chronicle pushing for regime change. Sir John Hall took over, appointed Keegan and the rest is history.

“You can’t begin to imagine how much it shames local media to hear George Caulkin on north-east radio actively backing the boycott, being prepared to stand up and, most likely be banned, while the local papers still continue to believe fans and Ashley deserve to be treated equally. You owe Ashley nothing. You owe your local readers everything.

“With respect to George, who is a fine reporter and a great north-east ambassador – it’s a sad day when a London-based newspaper, a Tory one at that – takes the fans’ side ahead of The Chronicle.

“We need you. And, I believe, local media has never needed a purpose more. It’s never needed local loyalty more. So what price your loyalty? Why sell out fans for the access to PR-controlled quotes from Ashley? Please join the boycott. Ask fans to join it. Pull out your reporters on the night. Yes it will most likely mean a ban but, take control. Your best reporting this year was during the ban.”

A Chronicle poll last week revealed that 90 per cent of readers backed the planned demonstration.

However, editor-in-chief Darren Thwaites wrote: “Those who stay loyal are not doing so to endorse the Ashley regime. Most will equally desire change, although many will question what form that might take.

“There’s no doubt a weakness of the boycott plan is that no one has really been able to articulate what change looks like and how it can be made to happen.

“Our position is that every fan has to decide for themselves – and their decision should be respected. Our role is to present all sides, allow all opinions and explore all alternatives.

“And let’s make one thing very clear. We’ve taken our approach because we believe it’s the right thing to do, not because the club has told us to.”

Between October 2013 and December 2014, journalists from The Chronicle, along with sister titles The Journal and the Sunday Sun, were banned from St James’ Park after the club objected to their coverage of a previous protest by supporters when there was a march to highlight disquiet over Ashley’s ownership of the club.

The ban covered press conferences and home matches, and followed a previous ban on a former Journal reporter, Luke Edwards (who joined the Daily Telegraph) for a story about a disputed dressing-room row at Newcastle.

At the time Thwaites, said: “We may be banned but we won’t be gagged. We want Newcastle United to be successful but it would be nonsense to pretend that the fans are happy about what is going on behind the scenes.”

This week he said: “The fact the ban is over and dialogue has re-opened doesn’t mean we’re now the club’s apologists. It’s just responsible journalism to present all viewpoints and then allow fans and readers to draw their own conclusions. And that’s exactly what we’re doing here.

“We’ll be criticised by some for not giving unequivocal backing to the boycott. But that’s fine. That’s healthy. We won’t shy away from the debate and we’ll cover every aspect of the proposed boycott without fear or favour.”

Wed Apr 22: SJA 2015 annual meeting. Details have been sent to all SJA members