The decision by a regional weekly newspaper to stop sending a staffer to cover its local League Two club’s away matches has backfired. 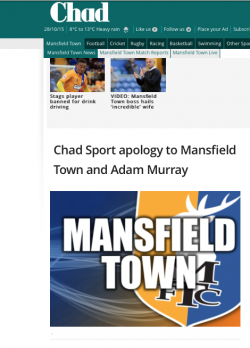 The Johnston Press-owned Mansfield Chad – the name evolved from a 1950s merger between the Mansfield Chronicle and the North Notts Advertiser – has made a public apology to Mansfield Town FC after a freelancer employed by the Sportsbeat agency filed a “misleading” report of the Stags’ goalless draw at second-placed Portsmouth last Saturday.

Sportsbeat has also made an apology over the report.

Most of the crowd at Fratton Park saw the game as an impressive, battling performance by the away side, but the initial report that appeared on the Chad’s website offended Mansfield’s manager, Adam Murray, who said it was disrespectful to his players. The paper comes out on Wednesdays, so after the website report was amended, it did not appear in print. But the Football League Paper, which carries content provided by Sportsbeat, did include the report.

“Chad Sport would like to offer its apologies to Mansfield Town and manager Adam Murray for any offence caused by our match report on Saturday,” the paper said in its apology.

“The report incorrectly criticised Stags and Adam for the tactics used during the battling display, which secured a superb 0-0 draw at Portsmouth.

“Our report was commissioned from a freelance supplier and was not written by a Chad reporter.

“Chad Sport are fully behind Mansfield Town and the excellent work Adam Murray is doing in laying the foundations for what we all hope will be a successful play-off push.

“We would like to assure everyone connected with the club that such misleading reports will not appear on the Chad Sport platform in future.”

The football club accepted the apology but the issue highlights concerns raised by the NUJ’s Nottingham branch earlier this month.

Branch chair Diana Peasey said: “Sadly there is an inevitability in what has happened. When you keep cutting experienced staff, such as photographers, reporters and can’t stump up to pay for your own football correspondent, what does that say about the enduring quality of the paper and its ability to survive?

A spokesman for Johnston Press said: “We are constantly looking for new ways of delivering the best possible all-round service to Chad sport fans. We remain committed to covering all Mansfield Town FC games, home and away, and consider our relationship with the club one of our biggest strengths.”

The newspaper was one of several in the company’s North Midlands and South Yorkshire region to pilot its “newsroom of the future” initiative, which sees journalists work across multiple titles within the same area. The decision not to cover the football club’s away games was made partially to cut costs, but apparently there were “other contributing factors”.

Probably the only consolation in the whole affair will be that the reporter at least got the names of the goal-scorers right.