Where is it all going to end? 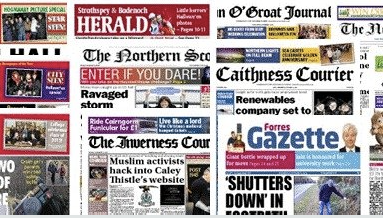 The other day, when I asked at the local library to where the town centre office of the Huddersfield Examiner had moved – it wasn’t where I last visited – the assistant thought for a moment and then said that she didn’t think there was one any more.

I wasn’t surprised, to be honest. Newspapers are routinely printed well outside their circulation areas and fewer and fewer maintain a central presence. The newspaper office used to be landmark, just like the town hall and the main post office. Not any more.

Then we had titles being subbed in “production centres of excellence” sometimes hundreds of miles from the towns and cities they covered. That led to claims of “production-line subbing” and the loss of genuine local knowledge.

The next stage in that progression which makes “local” newspapers increasingly remote from the areas they are supposed to serve is the announcement from the biggest newspaper publisher in the Scottish Highlands that it is to outsource its pre-press and design – to India.

This is no joke. It means the loss of 12 jobs at the Scottish Provincial Press, publishers of 16 newspapers in the north of Scotland, including the The Inverness Courier, The Northern Scot, Highland News, John O’Groat Journal and The Banffshire Advertiser.

Willie Wallace, a Unite regional officer, summed it up when he said: “These are jobs that are going in the Highlands that are hard to come by. A lot of these people have been there for 25 years. They won’t get similar work at all in that area. Some of them live in quite remote areas.”

Other regional publishers have before outsourced work to Express KCS, an American-owned company based in Delhi. As far back as 2008, Newsquest, publishers of Brighton’s Argus, announced that 27 pre-press jobs – 15 in Brighton and 12 in Swindon – would go as work was outsourced to India.

In 2012, Johnston Press, publisher of The Scotsman, transferred its advertising production work there.

But this latest move by SPP has shocked journalists in Scotland.

The jobs, in Inverness, Wick and Golspie, are being replaced by graphic designers and layout artists earning between £1,500 and £2,500 a year according to an advertisement on an Indian jobs website. In the advert, Express KCS tells prospective employees that the company is the “creative production world’s best-kept secret”.

Well not any more. Not in the Scottish Highlands anyway.

The Observer’s former correspondent in India, Gethin Chamberlain, says that the salaries are barely the legal minimum in Delhi but Express KCS’s chief executive, Robert Berkely, says that his company pays “slightly higher than the market rate … if our salaries were low, we wouldn’t attract recruits”.

Certainly those applying to work on the SPP titles are expected to be graduates and to have prior skills.

The graphic designers alone need a Bachelor’s degree in Fine Arts/Graphic Design unless they have hands-on-experience in “more in the area”.

All very interesting but of no consolation to the SPP 12 who have just lost their livelihood and are very unlikely to find similar work in the Highlands.

Scottish Provincial Press remains unmoved. Its managing director, Thelma Henderson, said that the decision had been made for “sensible business reasons”.

She said: “Scottish Provincial Press has a strong business model which is performing well beyond industry expectations. The traditional newspaper and magazine publishing business model, however, is evolving with the transfer of many traditional revenue streams to digital alternatives.” Or as we have suspected for some time, our core business – producing newspapers – will never be the same again.

Scottish Labour leadership contender Ken Macintosh MSP hit out at the decision: “The news that Scottish Provincial Press are considering outsourcing jobs to India is bad for the Highlands and bad for the wider Scottish economy too. These are good, high-quality, skilled jobs in an industry that has had years of dedicated service from the people of the Scottish Highlands.”

In an early-day motion SNP MP Paul Monaghan called on the company to “preserve links between Highland communities and the newspaper titles it publishes”.

Highland Council leader, Councillor Margaret Davidson, wrote to SPP: “This is a time when many in the public and private sector are trying to grow employment and the economy in the region and it is disappointing to see a respected organisation, with a close relationship to the public sector, reducing its local workforce and outsourcing employment elsewhere.

“I quite understand the changing nature of the press industry and the need to meet budgets. However, outsourcing jobs can never be a good solution for the economy of the Highlands. I urge SPP to consider the concerns which are being widely raised and take another look at how they can reduce costs without impacting on local employment.”

Almost 500 people have so far signed an online petition raised by Moray councillor Sean Morton calling on SPP to reverse its plans to sack those 12 production workers.

SPP, though, is ignoring it. Which leaves us with that unanswered question: where is it all going to end?