With just days to go until the biggest date in triathlon’s annual calendar, the Hawaii Ironman, in Britain, NatMag-Rodale has announced that it is to scrap the print version of Triathlete’s World magazine from the latest, November issue. 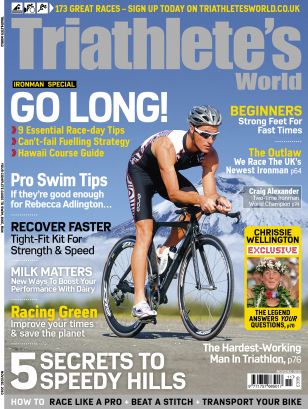 According to a report in Press Gazette, there will be no redundancies, as the title is being retained online, with with British Society of Magazine Editors award-winner Alison Hamlett continuing as editor.

Triathlete’s World, a spin-off from successful sport and health titles Runner’s World and Men’s Health, is thought not to have managed to grab a large enough share of monthly sales in a marketplace which offers lucrative ad sales to equipment manufacturers – offering top-end cycling, running shoes and swim kit – but which already has several established titles in the marketplace, with imported titles from the United States and a flourishing number of online outlets.

NatMag-Rodale group publishing director Alun Williams said: “Triathlete’s World is a great brand, with a distinct position within the triathlon market. However given the size of the market, and the number of titles within it, we see the future of this brand within the digital space.”

A company press release said: “Alison will be responsible for building the website along the highly successful Runner’s World model, involving a rich content experience, comprehensive race entry system, and a suite of interactive tools.”  She will also edit Natmag-Rodale’s growing portfolio of bookazines in the running and triathlon markets.