The personal library of one of Fleet Street’s leading sports writers is in need of a new home.

Terry O’Connor, a former chairman of the Sports Journalists’ Association, has died at the age of 92. 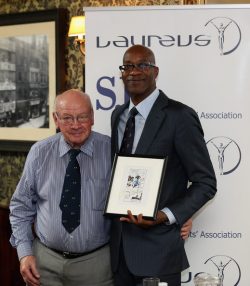 And now his family are offering his extensive library of sports books and match programmes to anyone who will treasure them just as much as Terry did.

He began his sports journalism career covering the 1948 London Olympic Games but is probably best known for his time as the Daily Mail’s rugby union correspondent, covering 11 Lions tours and three World Cups before standing down in 1990.

His daughter, Coral Ross, said: “Our father’s collection of sports books was extensive. There are over 350 rugby books alone, plus scores on athletics, other sports, sportsmen and sportswomen.

“He also kept a large number of match programmes, many of which are also annotated with his match notes.

“Whilst we are loath to let them go, we do not have the room to store them. We would love them to go to a good home and be appreciated. Otherwise we will have to dispose of them.

“Among the collection are historical rugby texts, player autobiographies, overseas books and numerous JBG Thomas books. We have a complete inventory.”

Anybody interested in taking Terry’s library should email either coralt@bigpond.com or barry@dulwichfm.co.uk, or call 07970 644894.