A leading sports writer or columnist could be among the 20 compulsory redundancies at The Times announced this week. 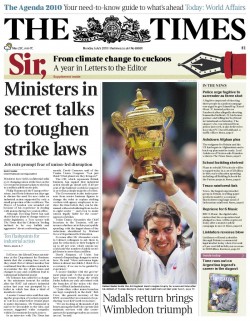 That’s according to blogger Liz Gerard, herself a former senior production journalist at the paper, and evidently still with well-placed sources at Wapping.

The Times was named Sports Newspaper of the Year for a third time at the SJA’s British Sports Journalism Awards just three months ago. But it seems certain that some members of that award-winning team will not be working for the title for very much longer.

Gerard, on her SubScribe blog yesterday, outlined the latest of a seemingly annual cull of staff at the News International titles due to the heavy losses sustained by The Times. It is notable that she identified former senior sports desk figure Craig Tregurtha as being a key figure in this latest round of job cuts.

“And so here we are again,” Gerard wrote. “On Monday [John] Witherow, now The Times‘s temporary acting editor, called staff to the 13th floor and, accompanied by new managing editor Craig Tregurtha, spoke of unsustainable losses. Twenty jobs would go, and again they would all be compulsory redundancies – the victims, it is said, handpicked by the editor himself…

“It seems that this time the execution order has gone out on some of the most highly paid journalists: columnists, leader writers, feature writers, award-winning specialists. In one particularly callous scene, five sports writers were hauled in front of the firing squad and told that one of them would be shot 48 hours later.”

The identities of the unfortunate fivesome are unknown. It is being suggested that “big names” will also be leaving the Sunday Times, though how this may affect the sports desk there is also not yet known.

“For several years now Times Newspapers has been losing money,” Witherow told the staff meeting earlier this week. “The company has tolerated this because it could use profits from elsewhere in News Corp to pay for our papers and because the proprietor has a passion for newspapers.

“I fear that era of being subsidised is coming to an end. The separation of the two companies means that the newspapers will form a bigger and more exposed element in the new News Corp.”

According to Gerard, the subs’ desks are primed for “re-organisation”. And as she observes acutely,  for those out of a job, the options for re-employment are not what they once were. For those left in work, things just become ever more grim.