KEITH ELLIOTT, the SJA’s man in front of the white board with the laser pointing device, has been reviewing the applications for his summer schools 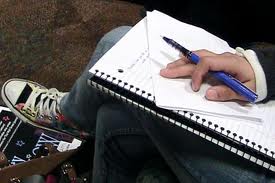 The good news: being older than 21 does not debar you from a career as a sports journalist (or any sort). The bad news: you’ll need to offer significantly more than a fresh-faced graduate.

Journalism is one of those careers that you can enter in your mid-20s, even into your 30s, without feeling out of place. Personally, I prefer people for my twice-yearly journalism course who aren’t straight out of university. It means you’ve had some experience of life, realise that the world doesn’t owe you a living and that your parents are unlikely to stump up another £1,000 if you get into more debt.

I’ve been swamped with applications for our summer course over the past couple of weeks from students who have realised, too late, that the world of work isn’t just beckoning; it’s grabbing them by the throat. All too many think that walking out with a 2:2 in geography and taking a journalism course means they can boast to their mates that they are all set to swan around the world, being paid to write about places that take their fancy. Doesn’t work like that.

So I tell them to read the SJA website, undertake some work experience and find out what journalism’s actually like. But even those who spent a week last summer on Marie Claire, or shadowing a local reporter, are told politely that this doesn’t demonstrate an overriding passion to join the party.

“But I’ve got the money to pay for it!” they plead.

Well, yes. There are courses that will take you if you can pay: talent, ability or demonstrable interest irrelevant. And good luck to you if you’re dumb enough to sign up. I heard of one that started with 38 people. Only one completed it.

Those who have spent a couple of years working to clear college debts get my vote every time. That in itself shows some responsibility (not a word that figures highly in most students’ vocabulary).

But they have also learnt that it’s a nasty world out there. Getting up every morning at 7am to join a grillion other people battling for a seat on buses and trains; doing a menial job cos you’re the youngest in the office; being treated like a halfwit because of your age; or as “posh” because you’ve got a degree. Welcome to the school of hard knocks.

Someone who’s graduated from that academy is gonna work extra diligently because they don’t want to go back there. I like people who have been in PR (“Get me out of here!”), sales or acting. They’re good with people. On several occasions, I’ve rejected people because they could offer no obvious signs that they related to other humans.

Anyone who lists their hobbies as playing computer games online, postal chess and reading tends to worry me. Societies at school and university? None. Involvement in the community? None? Membership of clubs? None. Chance of a job in journalism? None.

One chap I interviewed admitted that his personality was such that he had been given individual tuition at university. As my fellow interviewer commented afterwards: “If you took him, I reckon the others would have thrown him off the top of the building by the end of the first day.”

So signs that you get on with others are vital, whether you’re going to take a course or you believe your talents are such that you’ll easily find a job.

In an earlier column, I stressed that it’s crucial to have a vague understanding of grammar, spelling and punctuation.

An old editor once told me: “Never take anyone – don’t even bother to interview ’em –  if they have lower than a C at GCSE English language.” I tried, once. Wish I hadn’t. If you’ve never done grammar, take a course or read English for Journalists. It won’t get you a job, but it can sure lose you one.

The person I want to interview has done some interesting things and tried to write on them. That’s what journalism’s all about.

Written a million application letters and not heard a thing? Not nice people, those editors. Doing a blog? Good. Writing and offering your work to newspapers, website and magazines (even if it’s being rejected)? Well done. Working on a website for free (preferably not doing gig reports)? Shows you’re serious.

We also ask for a 500-word interview with someone interesting, with a warning that interviewing your mum or non-famous bands (“They’re gonna be big next year”) will almost certainly elicit a polite refusal.

We also discourage Q&A interviews. If you can’t work out why, you need to rethink your career.

Those with the wit to get someone famous or notoriously shy scores extra marks. Some have persuaded ministers, top business people, celebs or (best of all) those with a great story to tell.

“What do you mean?” she asked

“Well, was she in the country doing a promotion, or something?”

“Oh, I never met here, I made it up. That’s what journalists do all the time, isn’t it?” And her mother was editor of a household-name magazine.