GLASGOW DIARY: Congratulations to Mark Shearman, the veteran athletics photographer, who is working in Hampden Park just days after collecting his MBE from the Queen at Windsor Castle, for services to sports photography.

Shearman has covered 13 Olympic Games in his career, beginning in Tokyo in 1964.

Glasgow is the third Commonwealth Games in Scotland at which Shearman has worked, having covered the 1970 and 1986 Edinburgh Games.

But we’d like to hear from others who have managed to work at 1970, 1986 and 2014 Games, and get some of the memories (and pictures) from them or their colleagues – email stevendownes@sportsjournalists.co.uk.

SO, USAIN BOLT comes out on Twitter to accuse a journalist of lying in order to make a headline after he is reported to have said that the Glasgow Commonwealth Games are “a bit shit”.

This was apparently said on the morning after he’d seen an international men’s 100 metres title being won in a time nearly half a second slower than his own world record.

Bolt’s manager was quickly into damage limitation mode, telling the BBC that the report was “utter rubbish”.

The journalist, and her editors at The Times, respond by publishing the full transcript of the exchange with Bolt (conducted at a bus stop outside the Athletes’ Village) which clearly demonstrates that the words spoken were those reported.

What does Bolt, with the assistance of the Games organisers and their mutual sponsors, do? Now he says that he was talking about the Scottish weather. Convenient?

Let’s hope it’s not too cold and rainy when the world’s fastest man takes to the track tonight for his fleet and fleeting appearance in the sprint relay.

AT THE start of these Games, the loudspeaker in the main press conference room didn’t quite work as well as it should, but in the last few days the sound has been a lot clearer. Just as well, since there appears to have been such an issue about the accuracy of the quotes.

Less widely reported has been the comment of another Jamaican sprinter, 100m gold medallist Kemar Bailey-Cole, who left local reporters aghast this week when he called into question the quality of Scottish food. “London was way better,” he said.

THE SPORTS JOURNALISTS’ ASSOCIATION is delighted that the Glasgow 2014 organisers have recognised us as the 72nd nation or territory in the Commonwealth, as the main scoreboard at Hampden Park confirmed in giant-sized letters alongside the name of our committee member, Philip Barker (who thought he was English) when competing in the media race this week.

An SJA spokesman might have said, “It is a matter of immense pride that the SJA has finally been accepted into the family of nations that is the Commonwealth, and we intend to play as full a role as possible alongside those other sporting giants, such as the Falkland Islands, Gibraltar and the Isle of Dogs.

“We have already selected Ian Cole to captain our bowls squad for the 2018 Games at the Gold Coast, and Craig Lord has been put in charge of coaching our mixed water-polo team.”

And since you asked, Barker failed to break the eight-minute barrier in the media mile race. Appropriately the fastest time of the day was recorded by one of the results distribution team. He would have been even faster had the course been up three flights of steps and along narrow passages behind journalists.

THE GAMES NEWS SERVICE has been providing a daily “Fun and Games “ wrap. They did a similar round-up for the Sochi Games that bordered on the subversive at times. In Glasgow, one story featured expletive-laden quotes from Jevon Atkinson, apparently a god-fearing Christian whose reaction was described as refreshing. “Holy shit. Am I doing this right? It feels good coming seventh. Most people would say fuck this shit, but I like it. I have got Jesus on my back but today he did not show up to help me.”

OUR PREVIOUS diary commented on the proliferation of selfies, or “Commonwealthies”, being taken with competitors by journalists who were apparently in Glasgow to work.

The Games organisers have taken a more stern approach to the phenomenon, today firing three security guards for having their photo taken with Usain Bolt.

It will be interesting to see whether the Commonwealth Games Federation adopts a similarly zero tolerance approach to a couple of senior figures in their organisation who have indulged in a spot of what we understand is called “photo-bombing”: 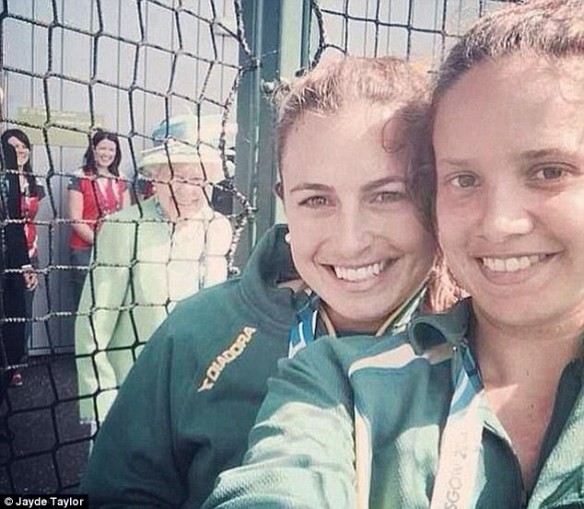 The first occurred when Her Maj gate-crashed a selfie of a couple of Australia’s hockey team, Jayde Taylor and Brooke Peris. 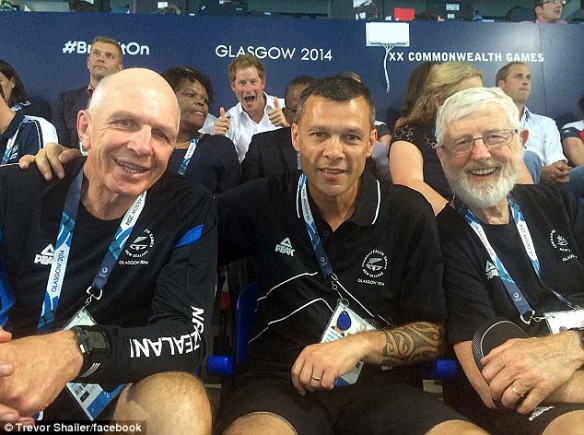 Prince Harry photobombed Sir Gordon Tietjens and others from the New Zealand Rugby 7s staff while they were at the swimming at Tollcross.

There is gathering momentum to a campaign to get the Duke of Edinburgh to enter into the spirit of the Games and get into a photobomb, preferably at the lawn bowls.

MEANWHILE, commentator John Helm, best known for his football work, has showed his versatility. Pitched in to do the boxing after a colleague took ill, he ended up covering 71 bouts in a single day.

MOST MEDIA ceremonies have made use of the galaxy of former champions available. Former ITV Athletics editor Richard Russell also got to present one because he now sits on the Commonwealth Games Federation sports committee.

MEL WATMAN, the former editor of Athletics Weekly, is here too, still documenting the sport he loves. He first covered the Games in Cardiff 1958, back in the days when England used Land of Hope and Glory as the victory anthem.

England’s 71 seconds’ worth of Jerusalem – each nation is allowed 90 seconds maximum – only gets us as far as “… Those dark satanic mills”. Not exactly the most up-beat way to finish. Lovely as Sir Hubert Parry’s tune may be, which England are using for the second time in Glasgow, it is not nearly as rousing as Elgar’s anthem and the large English contingent in the crowds shows no inclination to join in.