Star of stage and screen (alright, he was on last night’s The One Show), SJA committee member PHILIP BARKER charts the role of sports journalists in the founding and the staging of the Commonwealth Games 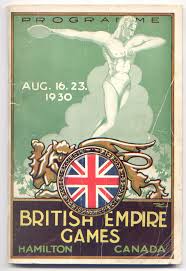 A Canadian called Melville Marks “Bobby” Robinson would certainly have approved of our SJA/BTSport reception to greet our journalist colleagues in Glasgow. A reporter with the Hamilton Spectator and manager of his country’s athletics team, he was also the founding father and prime organiser of the first British Empire Games when they were staged in 1930.

Robinson’s successful multi-tasking established a modest gathering of 11 teams in his home town in Ontario. All slept in dormitories at the Prince of Wales School and, as far as can be established, not one went down with Norovirus.

Those first Games were reported in the press and.a few weeks later came the newsreels. Lord Burghley added Empire gold to his Olympic crown won two years earlier and Billy Savidan, of New Zealand, won the six miles, but not before a bungling official had almost cost him the race by miscounting the number of laps.

Slowly, the Games grew but it was not until the 1958 celebration in Cardiff that they were televised by the BBC. “It introduces novel and complicated technical problems which have to exist side by side with the normal press requirements and the two are not always reconcilable,” said the organisers.

Press facilities cost the grand total of £2,346 one shilling and five pence. Press boxes were built at all venues with 200 seats at the Arms Park for athletics and 100 for swimming at the Empire Pool.

“As soon as the press steward had any information to give, he attracted the attention of the reporters by depressing a key which lighted lamps on the press desks. Results were then read out at dictation speed.” Beats unreliable wifi any day!

“THOUSANDS GO GAY AS DUKE DRIVES INTO GAMES CITY” was the headline in the Western Mail after Prince Philip arrived in Cardiff . The Queen had been expected to attend, but illness kept her away.

It was not until 1970 in Edinburgh that she was present in person the Games for the first time. Then, 636 press from Britain were accredited, the largest contingent by far. It was also the first time that the Games were televised in colour. And the band even played “Happy birthday” for David Hemery, the 400 metres hurdles Olympic champion from 1968, who celebrated by winning 110 metres hurdles gold at what was now the British Commonwealth Games.

The Daily Mail’s Ian Wooldridge was one of 392 writers accredited for the 1978 Games staged in the Canadian city of Edmonton – or “Deadmonton” as the Alberta city was dubbed by some of the underwhelmed British press corps, who derided the Canadian host venue, which was decidedly lower key than the most recent Olympic Games that had been staged with some controversy in Montreal.

Under the headline “RELAX: SPORT IS NOW AMONGST FRIENDS”, Wooldridge talked of a “sports meeting of something less than intergalactic significance” and talked of “apparently ludicrous mismatches as the rock of Gibraltar attempting to pin back Australia’s ears at almost anything”.

What Wooldridge did not reveal was that he was about to be smuggled into the Cayman Islands team and passed off as an athlete for the opening ceremony. Officialdom had the expected sense-of-humour failure, threatening the Cayman Islanders with expulsion from the Games, and with jail for the sports writer. Neither came to pass.

In 1982, Desmond Lynam was joined by Steve Ovett to greet bleary eyed viewers for BBC’s Breakfast with Brisbane. The programme paved the way for breakfast television which arrived for good the following year.

The last time the Games were held in Scotland was 28 years ago. Edinburgh got their sums badly wrong, To add to the misery, more than half the teams boycotted over the Thatcher government’s support for apartheid South Africa. It is little wonder after that scarring experience that Scottish sport last night welcomed a full complement from the Commonwealth family and stressed Glasgow’s long-term support for Nelson Mandela and the anti-apartheid movement. 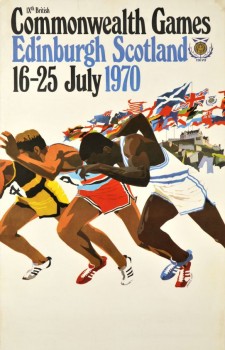 In 1986, there was no Danny Boyle nor specialist ceremony-staging companies, and the BBC was asked to produce the opening ceremony, which began with hundreds of youngsters running the Royal Mile. Not for the last time, promises involving millions of pounds from Robert Maxwell had failed to materialise.

The late David Coleman did his best to mask what looked a very second-rate effort. It included floats that would have embarrassed a village carnival and a lame stunt involving Nessie. Even stadium announcer Bill McLaren sounded embarrassed. At least the much lamented rugby commentator was spared John Barrowman’s performance last night.

In 1986, Wooldridge was still in his pomp at the Mail, and arrived in Edinburgh having just agreed a £1 million four-year contract. At the Main Press Centre, the organisers admitted, “There were problems in the early days”, and noted, “the media have always been good at fighting their own corner and in the end was outstandingly successful. Some sections of the Scottish media adopted a more negative attitude to the Games as a whole than their Commonwealth colleagues.”

The organisers trumpeted a system “which gave journalists the facility to key their own calls on any of the booth telephones provided”, though to do so, each journalist had to pass a credit vetting test and make an advance payment of £100. The results were computerised and provided by Wang. Remember them?

Many in the media suggested that the Edinburgh experience had all but killed off the Commonwealth Games, yet over the last quarter of a century, the Games have regained their status and ethos.

The process began in Auckland at the very next Games in 1990. In the words of the organising committee “the media relaxed , luxuriated even and voiced their praise, even the mad dogs of Fleet Street who were pussycats putting their appreciation”.

In 1998, Kuala Lumpur in Malaysia saw an Asian city staging the Commonwealth Games for the first time, utilising a budget and facilities worthy of more Olympian ambitions.

The choice of main press accommodation was intriguing: the Mint Hotel was notorious, outside of Games time, as a brothel. It should be noted that most members of The Times’s team, as well as Prince Edward, the head of the England team delegation, were accommodated elsewhere, in a 6-star hotel.

At the last home Games in Manchester in 2002, 866 journalists and 326 photographers passed through the Main Press Centre at the heart of the city. Not much has changed, it would seem, in the stories for journalists in the pre-Games news vacuum: many who read yesterday’s reports about the Sri Lankan cycling team training on a Scottish motorway will have recalled that 12 years ago, it was two members of the Kenyan cycling team who somehow found themselves on the M61.

After the successes in Manchester and in Melbourne in 2006, the media gorged itself on the organisational mishaps on the road to Delhi. If everything was ready at the 11th hour, many events were still were played out in front of empty stands.

Now the Games belong to Glasgow. Empty stands won’t be a problem nor should a supply of Haggisor the official drink Irn Bru, both available in the Games megastore. There’s nothing like reinforcing a few stereotypes.