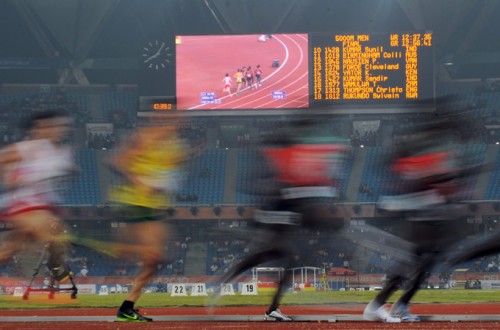 DELHI DIARY: JOHN WRAGG takes time out from reporting from the closing ceremony for the Express to highlight some of the outstanding memories from the Commonwealth Games

They’ve about got it right now. There’s signs to the media centre at the athletics stadium, people can actually get  tickets for events and not a lot has fallen over lately.

You still need to be careful down Mother Teresa Avenue because the monkeys with red bums scuttle across the madly busy dual carriageway, often with babies on their backs.

Not that it bothers the traffic. It’s like the M25 on speed. With no rules. No give way. No idea of discipline. And often no lights on tuk-tuks, cars, bikes or huge lorries at night.

The cyclists are the bravest. They ride bikes like the police had in England in the 1950s. But without the bell. On the other hand, they might have a bell. They just don’t use it.  Or signal.  Or look behind them.

And the cars and tuk-tuks duck and dive around more than Arthur Daley ever did. It’s eye-closing frightening.

The other day Alex Spink (Daily Mirror) , Rick Broadbent (Times) and me were in a tuk-tuk. A saloon car came up on the inside of us, cut straight in front and turned right. Brown trouser time.

But somehow it works. I’ve only seen one crash. Compare that to a wet Friday on the M6. So who is safer?

IT’S A BIT like these Delhi Games. They’ve hovered on the verge of chaos and yet they’ve got there in the end. Not sure quiet how, but they have.

You can bet Glasgow will organise it better in four years time, Jimmy.

And while we’re at it, thank you Team Scotland for the  open invite to  your excellent facility in the Meridien Hotel and the nightly buffet on offer after a long, long day. Much appreciated.

But criminally poor organisation is not the full story of Delhi or India. They are a wonderful people – the higher ranks apart – so nice and so hopeful that you don’t tar everyone with the same brush, as they say here in a kinda quaint way, just  because officaldom has ballsed-up.

If a taxi driver says he will be back to pick you up, you can rely on him that he will. If the girls on hotel reception can help, they will. With a wonderful warm smile.

India isn’t what it says it is, an emerging world power. There is too much poverty – all moved to the outskirts of Delhi for these Games. There’s so much for India still to do behind the new office blocks.

But it’s not Have A Nice Day culture either. Thank God. Here, they do still mean it.

NICEST MOMENT? Boxer Tom Stalker. In a full Scouse accent he said: “I’ve just met Kelly Holmes. Me, from Liverpool! And I’ve got a gold medal. I can’t believe this has happened to me.”

FUNNIEST SIGN: “Tiffin not allowed to be brought into this stadium.”

BIGGEST ACHIEVEMENT: Bartering a  cocky tuk-tuk driver down from 500 rupees to 50 rupees.

MOST REWARDING MOMENT: The smile of thanks on a tuk-tuk driver’s face when we gave him 100 rupees for a 50 rupee drive because he had been so good to get us through cloggd traffic.

MOST HELPFUL MOMENT: When a staff member at the Ramada Plaza Hotel stopped traffic on a surging road so I could limp, with my twisted ankle, from one side to the other.

BEST DRAW DROPPING MOMENT: England’s athletes and officals being asked to applaud the media for coping with the problems we’ve had out here. And they did!