The Delhi Commonwealth Games saw a number of records broken on the track, in the pool and in the other arenas.

Less obvious were the records broken by the Matchtight media team working with the England competitors in India and from their offices in Bath, sending forth more than 200 releases, reports and news updates over the course of the Games.

Matchtight’s updates were a vital resource for British journalists, and not only to those back at home but even those out in Delhi, where the predicted problems with internet access proved to be only too real.

These communication problems, when compounded with an official Games information system that did not function properly until Day 8 of the Games, it meant that the Team England service was indispensible.

Caroline Searle headed a team of eight in Delhi, with her husband, Bryn Vaile, holding the fort back in Bath with another two colleagues handling UK-based requests and distributing news and pictures.

“We fried our brain cells on our mobiles – quite literally, I think,” Searle says of the first three days, when even Hotmail was unavailable – apparently blocked – in the MPC and Athletes’ Village. Searle and her team were forced to make hundreds of phone calls, texts and Tweets. 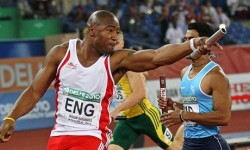 “Eventually we got one link to the outside world working. We sent a single version of press releases back to the UK and distributed from there,” Searle says.

Because Delhi’s official Info system did not work – shades of Atlanta in 1996 – the English team press office had to create daily schedules and research results through a mix of venue visits, calls to team managers and coaches, website research and good, old ingenuity, late nights and early mornings.

According to Searle, with her team regularly working from 7am local time and not managing to get to have dinner until 1am the following morning, all in intense heat and humidity, exhaustion was never far away. “People were falling asleep in their food, several nights running, as they tried to grab a bite to eat,” Searle said.

“Adversity does funny things, though. A spirit of cooperation broke out among the media – after a few initial frustrations were vented. Guys shared stuff and helped each other.”

Before heading off for a 2am flight back to London, a weary Searle said, “I’d like to pay tribute to the press office and newsteams working for England here and to the Matchtight team back at home who for a week before departure were under siege as the Games topped the news agenda.

“It was a close call at times, but big tributes to Craig Hunter and Ann Hogbin who helmed the effort to get the Village ready for the England teams and have conditions clean and safe.

“As usual, we planned our media operation well, but this was a tough Games – tougher than anything since Sydney. We made it work and we are now all tired.”

“We have a great sense of achievement,” said Searle. “The media have sent several messages of thanks for our help and the athletes and team managers seem very happy with us, too.

“Personally there were some emotional moments.

“The artistic gymnastics team soared above their medal expectations. It was a privilege to work with such dedicated, successful but down-to-earth people, and the signed picture I received will go on the wall at home with the one from the Athens Olympic rowing men’s four.

“And, what about Julia Shaw? Aged 45, making her Games debut and taking a medal on a scorching day in the road race time trial.

“There’s hope for us all yet…”