Every so often a book comes along that changes the way you think. Eat Sweat Play is one of those books.

Bold and brave, it’s a beautiful read, with author Anna Kessel, a Guardian and Observer sports writer, emerging as a modern-day Roberta Gibb. 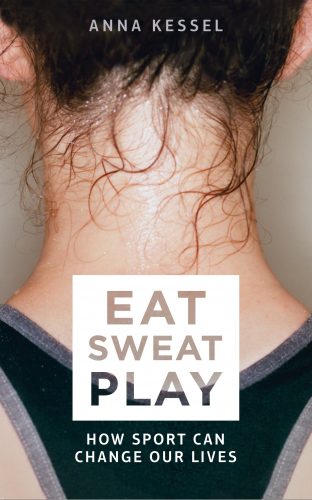 Gibb famously became the first woman to run the Boston Marathon in 1966, hiding in the bushes before leaping out at the starting gun to join the field of men. She ran in disguise at first but slowly peeled off her layers to run openly as a woman, defiant – and beat two-thirds of the men in the race, making headlines around the world.

Eat Sweat Play is packed full of little nuggets like that about women in sport, their achievements, and the barriers they face.

But it’s also about how women have been routinely excluded from sport and exercise by everything from social stigma to pregnancy, and why they shouldn’t be excluded any more.

If the author achieves anything like the impact Gibb did, she’ll be doing well, but she certainly makes just as defiant a statement about women taking control of their lives, and their bodies.

We’ve all heard about Jessica Ennis-Hill, who triumphantly refused to choose between having a family and winning a medal, and ended up doing both. But did you know that former skeleton world champion Shelley Rudman used to home school her daughter in between downhill runs on the ice during training camps?

Or that Paralympic cyclist Sarah Storey breast-fed her daughter through a return to the track, soothing her to sleep in her Moses basket to the sound of an exercise bike’s wheels whirring?

There is no taboo too big for this book, whether it’s pregnancy, periods or the menopause, issues which even some of our greatest sportswomen sometimes hesitate to discuss openly.

The passage about Kessel’s own miscarriage is heart-rending stuff, but it’s hard not to feel inspired by the way she writes about running helping her reconnect with her body and cope with her loss.

If anything, the narrative shines brightest when she’s talking about ordinary people and their own personal triumphs instead of the big-name stars she’s interviewed. Take the woman who took up boxing because it was the only exercise class she could take her children along to, and ended up so empowered she found herself embarking on a whole new career after finally enrolling on that archaeology course she’d always wanted to do.

It’s that kind of empowerment Kessel is arguing for, not just for all the benefits there are in that for a woman, but also for gender relations in general.

In the words of American marathon runner Katherine Switzer: “A woman achieves a better balanced self-image through sport and exercise.

“She can more easily regard men as friends and vice versa because men and women who run, play and strive for common goals together appreciate each other.”

So I’m off to shoot some hoops in the local park, and as a father with a young daughter, I might just take her with me.