When he saw the DVD in his local store, ANTON RIPPON was curious about a Hollywood movie about England’s notorious defeat in 1950. Too late, he realised he should have known better

It is unlikely that when inside-forward Stan Mortensen was plying his trade for Blackpool and England in the short-back-and-sides days of the 1940s and ’50s, he would have imagined that one day the leader of a rock band would play his character in a Hollywood film. Indeed, there was no such thing as a rock band when Mortensen was in his pomp, although when he was winding down his career with Hull City in the Third Division North, Bill Haley and his Comets were just emerging on to the music scene. 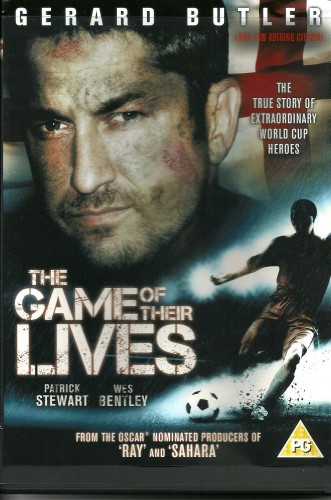 Half a century later, however, the moment arrived. In The Game Of Their Lives, released in 2005, the part of the Brylcreemed Stanley Harding Mortensen, native of South Shields, Second World War Wellington bomber wireless operator, winner of 25 England caps and an FA Cup winners’ medal, was played by former punk Gavin Rossdale, front man of Bush. In the mind’s eye it is hard to make the connection with Mortensen, although at least Rossdale was born in Kilburn and professed a liking for Arsenal.

Recently I bought the DVD and settled down to watch the story of how the might of English football was brought crashing to earth by the United States in a Brazil World Cup. As Nigeria and Iran were stumbling to a goalless draw the other night, it seemed a good a time as any to forget the present and dip into the past.

As it turned out, Mortensen and his England colleagues are but supporting characters in this story of the most sensational result in international soccer, as it must be called for American movie-goers. The Game Of Their Lives, according to its Californian production company, is less about the actual match than about “the family traditions and passions that shaped the lives of the players who made up this team of rank underdogs”.

It is also rather less about the whole truth and nothing but the truth, and more about how filmmakers twist little bits of history to suit themselves and, at the same time, leave pedants like myself grinding their teeth in frustration, not least because most of the inaccuracies add nothing to the story and are there simply to create stereotypes.

The stars of the film are, of course, the Americans – Mortensen is the only opposing player in the cast list – and in particular their captain, Walter Bahr, who led his side of part-timers to that famous 1-0 victory over England in 1950. It took place in Belo Horizonte, a Brazilian city that, 10 years later, enjoyed another brief moment of fame when climatologists declared it the best place on the planet to survive the fallout from a nuclear war.

There was only one American journalist at the 1950 World Cup, a reporter from St Louis with the spectacular name of Dent McSkimming – this, at least, is not a work of fiction, either – and he went along only as a fan. The film opens at a Major League Soccer game and Patrick Stewart (five years before he was knighted), playing that now ageing reporter, acts as a kind of narrator. Gerard “Spartans!” Butler plays the goalkeeper, Frank Borghi, a role which, as a native Scot, you imagine he must have enjoyed.

The Game Of Their Lives reunites director David Anspaugh, – his work includes TV series Hill Street Blues and Miami Vice – and writer Angelo Pizzo, who together collaborated on a movie called Hoosiers in which Gene Hackman starred. That film tells the story of a coach with a chequered past who teams up with the local drunk to steer a small-town high school team to the basketball championships – which may give you a clue to the treatment of the United States’ greatest soccer moment. The actors were taught the rudiments of the game by striker Eric Wynalda, veteran of more than 100 international games and the Bundesliga with FC Saarbrucken and VF Bochum.

The 1950 tournament in Brazil was the first time that England had bothered to enter the World Cup and they arrived as joint favourites along with the hosts. After an undistinguished win over Chile in their first game, they lined up against the United States on a bumpy little ground where the concrete cricket wicket of the British mining community had been torn up to accommodate a football pitch. It was there that the Americans went ahead with a 39th-minute goal through Joe Gaetjens, their Haitian centre-forward. Gaetjens, who later disappeared during political unrest in his country, scored with a header that was either the result of acrobatic opportunism or a complete fluke, depending on who is telling the story. I’ll leave you to guess how it was portrayed in the movie,

England were not immediately alarmed, but as the game wore on and their every goal attempt was either saved, hit the woodwork or went narrowly wide, the possibility of a hugely embarrassing defeat began to dawn. And so it turned out.

But if the British press were about to heap scorn on England, who went out of the competition after losing their next game 1-0 to Spain, the reaction in America was muted to say the least. The Americans’ own World Cup also ended after one more game. They pulled back from 2-0 down to draw level against Chile but then conceded three more goals and were on their way home, registering barely a blip on their country’s sporting radar.

Fifty-four years later, Hollywood set about putting that right, but with some holes in the story. About that I suppose we shouldn’t surprised. After all, we had to have Sylvester Stallone keeping goal in Escape to Victory.

Mortensen is portrayed as a jolly sporting hero. I never met him but I should imagine that his accent was more South Shields than clipped BBC English. I also doubt that, at a banquet following an FA XI victory over the US World Cup team in the run-up to the World Cup, he would have made a speech in which he fired up the Americans by hoping that “you all have a lovely holiday in Brazil”.

Other inaccuracies include Mortensen being introduced as a man “who has just scored three goals in the FA Cup final”, when that feat was still three years away; and the FA XI beat the US 1-0, not 4-0. I know this for a fact because my old mate, Bert Mozley, was playing for the FA who were touring Canada.

Worst of all, though, is the portrayal of goalscoring hero Joe Gaetjens as a black man who followed Voodoo when, in fact he was light-skinned and mixed race – his father was German – and he was, like most Haitians, a practising Catholic.

Maybe it doesn’t really matter. Maybe The Game Of Their Lives should be taken simply as entertainment – it was certainly more entertaining than Iran-Nigeria.