At Sydney, GB finished ranked eighth. As for Athens, the team didn’t even qualify, and after GB were ranked sixth at Beijing head coach Danny Kerry subsequently underwent a brutal debriefing session in which he was criticised by his own athletes. 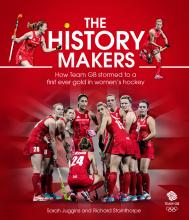 Immediately post-2008, a first Olympic gold for GB women looked as elusive as ever – at least to the outsider. Yet, I well recall midfielder Helen Richardson (right), who as an 18-year-old had broken into the team at Sydney, but been left “numb, devastated” by events there, defiantly telling me in an interview as she prepared for London: “gold is our destiny”. Her sentiments would prove to be prescient, if premature.

GB were again to be denied the ultimate prize, securing bronze at London 2012, and for the players, support staff, travelling fans and more than nine million who witnessed events back home on TV on that memorable Friday August night, it was a case of paradise postponed when gold was finally struck in Rio.

Maddie Hinch’s remarkable goalkeeping display, Hollie Webb’s penalty shoot-out winner, and the victorious team poised proudly on the podium, are among the images that will remain long in the memory – and are amongst the evocative photographs, principally by Frank Uijlenbroek and Koen Suyk, two of the world’s hockey photographers, that adorn The History Makers.

Yet, this book, written jointly by Sarah Juggins and Richard Stainthorpe, is significantly more comprehensive than a story of one night that gripped a nation, or even the preceding few weeks.  SJA treasurer Juggins, a freelance writer specialising in hockey, and Stainthorpe, who works for the International Hockey Federation as a writer and editor, provide a compelling insight into a campaign long in progress, and initially frustratingly limited in Olympic achievement.

The authors have chronicled vividly and meticulously how, from adversity, a vision was realised, and the intense planning that went into it. Therein lies the fascination of a story that will appeal to a readership far beyond hockey aficionados.

As Dame Katherine Grainger, Olympic gold medallist in 2012 and chair of UK Sport says in her forward to the book: “This is the story of ordinary people, who harnessed their incredible skills and set about to achieve something extraordinary together. Some were fuelled by the past, some were excited by the future, all driven to create their own piece of history and inspire as many as possible along the way.”

In their prologue, the authors stress that this is “unashamedly a celebration” and “doesn’t deal in cynicism and doubt”. Nevertheless, it does describe, through interviews with many of those who played a part, the travails present within Team GB from the failure to qualify for Athens – but, how under Kerry’s lead, disillusionment would turn ultimately to unadulterated joy following team GB’s nerve-riven penalty shoot-out with favourites Netherlands after the game finished 3-3 in normal time.

The story continues beyond that night. It was a period when Hinch propelled herself from GB goalkeeper into a national celebrity, and along with the likes of Richardson  – now Richardson-Walsh following her marriage to captain Kate Walsh and Webb – appeared alongside Hollywood ‘A-listers’ on chat shows.

But perhaps more crucially, the authors look ahead to Tokyo. Will a gold again be the team’s destiny? So much will be expected after a Rio night when GB women’s hockey players did their nation proud. In their exhaustive description of that feat, and what led up to it, Juggins and Stainthorpe have done their subject proud.