ERIC BROWN is an Everton fan. And he’s never been so well served by books about his favourite football club

We all remember the first time we saw what was to become “our team”, don’t we ?

The first time we came almost within touching distance of those heroes we had read about and maybe watched on television.

In my case it happened on January 24, 1959, when I was among a 44,000 Valley crowd to see my local club Charlton Athletic play Everton in an FA Cup third-round tie. Until then I had been quite content wearing a scarf and bobble hat in red and white colours. I even carried a rattle (remember them?).

That afternoon convinced an impressionable 11-year-old from Kent to share his affections with a northern team he had never seen before. Everton trailed 2-0 with just a few minutes to go when teak-tough centre-forward Dave Hickson roughed up home goalkeeper Willie Duff. Duff responded with a right hook that flattened Hickson then threw down his jersey and stalked off before the referee could send him off. Two late goals by Bobby Collins and Eddie Thomas earned Everton a draw and made this the most exciting match climax I had witnessed up to that point.

I thought Everton were great and I’d better support them too.

They won the replay in front of 74,728 fans and I was hooked. When, a few years later, Golden Vision Alex Young joined Roy Vernon in a magical strike partnership, I positively drooled. This was a brand of football not seen at The Valley.

I can even name the Everton team for that Valley Cup tie – but only because I turned straight to the entry in a remarkable vault of statistics from Steve Johnson, Everton The Official Complete Record. His revised edition of a 2010 sell-out book brings right up to date the statistical story of a club with nine league titles, five FA Cups, and a European trophy. It also includes details of pre-Football League lineups and war-time matches.

From their formation as St Domingo’s Football Club playing in a corner of Stanley Park in 1878 through their Anfield days to Goodison glory, the club’s rich history is laid out page after page.

From their formation as St Domingo’s Football Club playing in a corner of Stanley Park in 1878 through their Anfield days to Goodison glory, the club’s rich history is laid out page after page

Nearly 140 years after Everton’s birth as a church side, Johnson has carefully trawled the archives to provide teams, goalscorers, attendance and result where all these facts exist. Some of the biggest names in British football leap from the pages: Dixie Dean, Tommy Lawton, Young and Vernon, Alan Ball, Ray Wilson, Brian Labone, Neville Southall, Bob Latchford and a whole host of others right up to Romelu Lukaku.

The four-page spread on each season includes a summary, League table, results and lineups match-by-match and potted biography of a key player.

An additional facts and figures section on club and individual appearance records, managerial records, attendance records, penalty records etc makes this one of most comprehensive of club statistical publications around. 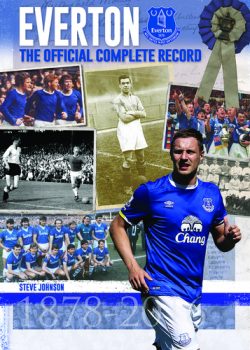 Johnson has corrected errors from the previous edition and introduced new facts. For example, Graeme Sharp has lost his second place on the all-time Everton scorechart because Johnson discovered three more League goals for Sandy Young in the 1900s.

Johnson’s book will undoubtedly please Everton “superfan” Dr David France, who has just published one of his own. France, well known on Merseyside, titled his book Everton Crazy – and with good reason.

It’s the story of his 60 seasons supporting Everton during which he travelled an estimated 2 million miles. Despite being based in the United States, Dr France founded the former Everton Players Foundation, the first such registered charity and benevolent fund of its type in the world. His model has been widely adopted by many other clubs.

He is also curator of The Everton Collection, the largest single club collection of memorabilia, artefacts, and ephemera in the world.

He founded the EFC Heritage Society, Gwladys Street’s Hall of Fame (the publishers of this limited edition book) and still had the time to write or co-author 16 previous books to aid Merseyside charities. His work was recognised with an OBE.

No wonder Goodison legend Alex Young said: “Dr France is more than a fan. Everton Crazy is more than a book.” His humorous account of a lifetime’s obsession makes this beautifully-presented book is unputdownable.