‘Ello, ‘ello, ‘ello, what’s going on here then… ANTON RIPPON feels the cover of a new edition of a book about sport’s many scrapes with the law

As soon as a book is published, there is a good chance that it will stand updating. If the book is about a subject like sport and the law, that likelihood is increased tenfold. 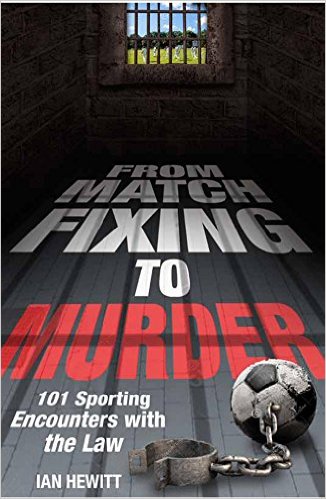 Right on cue, as Ian Hewitt publishes an updated version of his book on sporting legal cases, so the Swiss attorney general announces that he has opened criminal proceedings against FIFA president Sepp Blatter. Should the author have waited? Maybe not if he ever wanted to see his work in bookshops this side of Christmas. Any Christmas.

Hewitt went ahead, taking the precaution of calling the final chapter of From Match Fixing To Murder: 101 Sporting Encounters with the Law “FIFA and an Unfinished Story”. In the words of the acting US attorney general for the Eastern District of New York: “This is the beginning of our effort, not the end.”

Hewitt, a lawyer and member of the British Association for Sport and Law, is admirably qualified to produce such a work. He was involved in the formation of the FA Premier League when there were claims that the structure of English professional football was about to break apart, and he sits on the management committee of the Wimbledon Championships.

He published the book’s first edition in 2009 under the title Sporting Justice. Like last time, Hewitt has neatly divided his book into sections with themes as legal tangles that began on the playing field, betting, bribery and corruption, sportsmen who committed crimes on and off the pitch, negligence, doping, shady financial deals and discrimination.

Not forgetting football and its occasional clashes with employment law, from Eastham to Bosman, and whether rules to restrict the number of non-EU players should apply to countries that have a “special association” with Europe.

The result is a hugely entertaining and informative work that brings together a diverse range of cases involving sport or sporting personalities that have come before courts or tribunals, from the 1907 “Dismembered Body in the Trunk” murder committed by a former Wimbledon finalist to those 2015 arrests of FIFA officials on corruption charges. This updated edition includes a dozen or so fresh stories involving John Terry, Harry Redknapp, Lewis Hamilton and Rory McIlroy. As the author says, the flow of legal cases relating to sport seems continual.

All the obvious cases are here again including Lester Piggott and his pioneering attempt at self-assessment tax returns; the Chicago White Sox and their bid to fix the 1919 World Series; Bobby Moore and the Bogota bracelet; Ben Johnson’s challenge to his lifetime ban on the grounds that it was an unreasonable restraint of trade; and the question of whether the track operators were liable when an extraordinary accident during motor racing at Brooklands resulted in death and injury to spectators.

The Hillsborough and Valley Parade tragedies are examined and there is corruption in Italian football to consider. Sport and betting will always attract the wrong crowd. Hewitt includes some strange goings-on at floodlit football matches in south London, South African cricketer Hansie Cronje’s spectacular fall from grace, and Kieron Fallon and the Turf’s “trial of the century” which cost £10million and turned out to be a non-runner.

There is the question of whether the law should intervene when team mates start brawling, and whether referees owe players a duty of care, especially when it comes to overseeing rugby scrums.

And whether a Premier League club, in this case Arsenal, could prevent unofficial merchandise being sold in the streets outside its ground. That went all the way to the European Court and it won’t spoil the surprise if I tell you that some unkind commentators remarked that the Gunners had been more successful in the courts of Europe than in recent campaigns on the field.

Was Robert Dee libelled when the national press called him “the world’s worst tennis pro”? Everyone except the Daily Telegraph settled out of court. The paper won. Meanwhile, Belinda Petty was banned from refereeing at senior men’s judo competitions simply because she was a woman. She took the governing body to court and, as Hewitt, says, “any practice of excluding women from refereeing in sport, even an all-male competition, was blown away”.

No apologies for dipping in and out of this “treasure trove of human folly” as Simon Barnes described it in The Times first time around. It is that kind of book – and all the more enjoyable for it.