Eddie Giles, the former Daily Telegraph northern sport editor, was a prolific author with books on Derby County, Nottingham Forest and Notts County, and both Bristol clubs. He was also a writer who never missed a deadline. And even a terminal illness wasn’t going to spoil that record.

That said, his publisher thought that after Eddie’s seventh book he had finally shut down his computer. 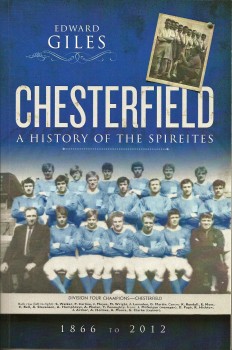 But last November, Clive Leatherdale of Desert Island Books received an email from Eddie. He had just finished an eighth book, a task he had set himself partly as a distraction from the prostate cancer from which he had suffered for some years.

Not wanting to blot an otherwise spotless reputation for delivering on time, Eddie hadn’t told Leatherdale of the project until he was sure that he could finish it.

And so, early in 2013, Chesterfield: A History Of The Spireites is published. Sadly, Eddie never got to hold a copy. Despite the best efforts of publisher and printer, the job couldn’t be finished before Eddie died just after Christmas last year.

“His body might have been failing but his mind remained as sharp as ever,” Leatherdale said. “There is no hint in the book that here was a writer with waning powers. The eloquence, style, rich detail and knack for unexpected anecdotes are as evident in this book as in all his others.”

He might have added that here also was an author in his 85th year. Typical of Eddie, when he knew that his days were numbered, he gave his wife, Joan, a list of people she should call to inform them of his death, and a list of people who he wanted to receive a copy of his final book. I’m honoured to say that I was on both lists.

The book itself is the story of a football club that has never been remotely fashionable, but one, nonetheless, full of incident. Even the exact date of Chesterfield FC’s formation is in doubt and the current club is the fourth to bear that name.

Most of the Spireites’ life has been spent outside the top two divisions of English football, but they are one of the few lower division clubs to reach an FA Cup semi-final. And they might have gone all the way to Wembley in 1997 when, then of the old Second Division, they led Premier League Middlesbrough by two goals at Old Trafford before eventually drawing 3-3 after extra-time and a controversy that led to a “we wuz robbed” claim by the underdogs that day.

Chesterfield can also claim a victory over Glasgow Rangers on the way to winning the Anglo-Scottish Cup in 1981 (the competition was never again held. The Derbyshire club retain the trophy).

In Eddie’s book – he covered Chesterfield for the Derby Telegraph in the 1950s – we can read of the Toff, the Chief, Bruno, Gentleman Jim, Pineapple Head, a very different kind of Mr Bean, and one of the strangest FA Cup ties. All in the golden prose of a fine sportswriter.