NORMAN GILLER muses on football fairytales and madness, sends birthday wishes to The Greatest, but saves his most creative writing for his expenses claim…

In more than 50 years writing about football I thought I had seen everything, but the kicking of a ball boy by Chelsea midfielder Eden Hazard took the “Beautiful Game” into ugly, unforeseen and obscene territory.

What is it about football  – and also Twitter – that it brings the worst out in people? I am assured by Chelsea insiders that Hazard is a pleasant, level-headed and decent guy –  “a typical Belgian” was one description.

But he completely lost the plot when kicking the idiotically time-wasting Swansea ball boy, who has got his 15 minutes of fame and shame. Hazard, whose father and mother were top-flight Belgian footballers, deserves a mummy and a daddy of a hiding for his moment of madness.

He is not alone in his stupidity. Pat Nevin, usually the most intelligent and perceptive of football pundits, put all the blame on the ball boy and none on Hazard, while on Twitter there was an explosion of abuse aimed in equal measure at the ball boy, the referee and the perpetrator of the “hazardous crime”.

Joey Barton came up with the most objectionable Tweet of them all: “Hazard hasn’t kicked him hard enough.” Suggs tweeted the same thing, which is understandable coming from the lead singer with Madness. Barton has no such excuse.

The cruelest Tweet I read: “Pity for the ball boy it was not Torres who was trying to kick him. He would have missed.”
BUT BRAVO Bradford City for putting some of the romance back into football. They have reached the League Cup final at Wembley from the depths of the old Fourth Division just as galloping greed was threatening to run away with the Beautiful Game.

Premier League clubs Wigan, Arsenal and Aston Villa all fell to a team assembled for £7,500, less than the cost for Roman Abramovich having the decks of his yachts swabbed.

I cannot think of a feat that matches it in my lifetime, when you take into account that Bradford almost went to the knackers yard just a few years ago.

We all thought 2012 just about exhausted sporting miracles, but here we are in the New Year with yet another fairystory … and also a unique moment of football insanity. A good time to be a sportswriter. Never a dull moment.

THE COURTROOM appearance of former Barnsley Chronicle sports editor Andrew Lodge for fiddling his expenses will have sent a shiver and a shudder through an army of journalists from my old-git generation.

Let’s be honest (or dishonest?), we were nearly all at it back in the day when newspapers were in profit and inflated expenses were an accepted perk. Many journos stretched their imaginations much more on filling out their claims forms than they ever did when writing their copy.

They must be a heartless lot running the Barnsley Chronicle these days to have allowed the case to get to court (the paper’s editor says he had nothing to do with bringing the case), particularly when considering the service the Lodge family has given to the paper for years.

Surely they could have spared Andrew the humiliation of being handcuffed and banged up in a cell? The fact that his sentence was 60 hours unpaid work put into context what the judge thought of the severity of his “crime”.

I remember Andrew’s dad, Keith, a fine, old-school journalist who filled the sports editor’s chair with distinction and loyalty. Taking into account aunts and uncles, members of the the Lodge family have worked for the Chronicle almost since it was launched in 1858.

It would be the height of hypocrisy for my band of sportswriting brothers to criticise Andrew too harshly. There but for the grace, etc.

I remember in my first week on the Daily Express in the early 1960s, a veteran reporter peering over my shoulder as I put together my expenses claim. “Young Giller,” he said, “you have got a lot to learn. Move over.”

He took my seat at the typewriter (a huge Remington beast that clattered like a Gatling gun when I was in full flow). Now here was an artist at the keys, a Lang Lang of expenses creation. In no time, my claim for £9 had grown to £19 as my teacher turned bus rides into taxi journeys and tea and sandwiches to three-course feasts.

“But how do I prove I had that meal?” I asked with a naivety that exposed that I was fresh off the subs desk.

My guru reached into his desk drawer and produced a blank pad of restaurant bills. “Fill it out yourself,” he advised like a Fagin of forgers, “but make an effort to disguise your handwriting.”

He brushed aside my attempt at thanking him. “I’m not doing it for you,” he said, putting me in my place. “You’re letting the side down if your exes are too low. It makes me look bad if your expenses are one-third of mine.” 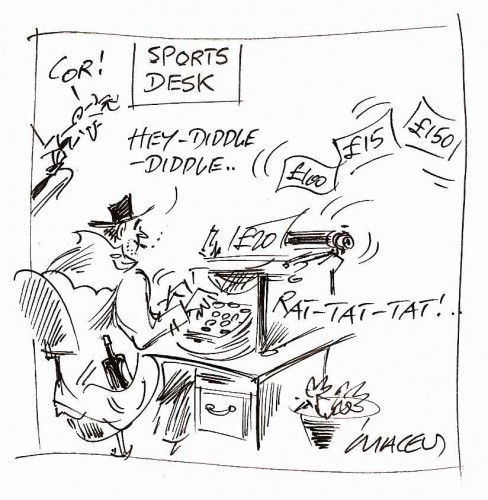 I learned quickly and within no time at all was putting more padding into my expenses than there was on Joe Namath’s shoulders.

But I was an amateur compared with our legendary columnist Desmond “The Man in the Brown Bowler” Hackett, who used to charge every other month for a new hat, while wearing the same one all year.

He once interviewed the 1960 Olympic gold medal-winning walker Don Thompson, who famously prepared for his 50km race in a steam-filled bathroom. On the Hackett expenses claim that week was £10 for hire of a waterproof suit. He’d done the interview on the telephone.

It was Des who first came up with the phrase: “Don’t let facts spoil a good story.”

Hackett’s classic was during the 1954 “Battle of Berne”, when the players of Hungary and Brazil clashed in a bottles and fists brawl after their World Cup quarter-final. Des gave a graphic account of how he got caught up in the fighting while going about his reporting duties, and he revealed that “trying to pull the players apart” he got his wristwatch smashed. Sure enough, in his expenses claim on his return was a replacement watch. Press box colleagues swore that the over-imaginative Des did not get within 50 yards of the battle.

His descriptive report was a front-page splash, and Express proprietor Lord Beaverbrook was so moved by it that he presented Des with an inscribed gold watch.

It was Des who got a “from the horse’s mouth” interview with 1967 Grand National winner Foinavon. In the entertaining column of his exes: a bag of oats.

Dear old Des lives on in modern rhyming slang. When somebody leaving a party and asks for his “Desmond”, they mean their Desmond Hackett: jacket. That would have greatly amused him, because he was a Lancastrian who cultivated a terribly posh English accent to go with his bowler hat image. Rhyming slang would not have come near his tongue. He and handlebar-moustached cartoonist Roy Ullyett travelled the world passing themselves off as English lords, wangling their way into cocktail parties galore.

Our sports editor John Morgan used to turn a Nelsonian blind eye to the hey diddle diddling, mainly because he was something of a past master at the art himself. He once threw a champagne party for sports desk colleagues at the Cheshire Cheese to celebrate his birthday, and – a fiercely proud Gooner – put it down on expenses as entertaining Arsenal’s Double winning team.

Colin Hart, doyen of boxing scribes, reminded me of the funniest exes-fiddling story, and it features our mutual late friend and fellow East Ender Peter Batt.

While on The Sun, Battman charged for a hospitality meal with racing trainer Vincent O’Brien. A sharp-eyed accountant spotted that the receipt Peter had pinned to his exes sheet was for four people, including two childrens’ meals.

Sports editor Frank Nicklin summoned Peter to his office, and asked him to explain the bill. “Well, boss,” said Peter, ad libbing beautifully, “Vincent turned up with two jockeys and they were both making weight, so they ordered from the kids’ menu.”

MUHAMMAD ALI was 71 last week, and I sent him my usual birthday greetings: “Here’s to many more years Champ. You remain The Greatest.”

I had the exhausting but exhilarating honour of working as PR with Ali during a couple of his European fights. He needed a PR like Einstein needed a calculator.

Away from the cameras and microphones, he was softly spoken, dignified, modest and the perfect sportsman, but with blistering opinions on religion and human rights.

When I watch the way David Price and Tyson Fury – or their spokesmen – duck and dive over whether they will ever get together in the ring I am reminded of the Ali reign. He never ducked a single challenge and always put action where his mouth was.

I am working on a book putting his ring record in context, compared with other world heavweight greats.

My research includes feeding facts and figures into a computer, but the final judgment will be based on flesh and blood.

And in my book, they don’t come better than Ali. Long live The Greatest.