ANTON RIPPON’s never won a book award, though he knows what music he’d have when, eventually, he goes up to collect one. He just wishes he could get away from 10 Rillington Place

That’s it, then. Another sports book of the year award almost done and dusted and, again, I haven’t won anything. 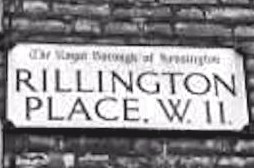 It shouldn’t be surprising. For a number of reasons. Not least that I didn’t have a sports book published in the last 12 months, but mostly because I sit at the feet of multi-award winners like Duncan Hamilton when it comes to discovering the golden touch that brings trophies as well as money from writing sports books.

I remember Duncan as a rather shy young sports reporter at the Nottingham Evening Post when I was in the features department there. He put that experience to good use by writing Provided You Don’t Kiss Me: 20 Years With Brian Clough that won the William Hill Sports Book of the Year award in 2007. A couple of years later, he lifted the title again with his Harold Larwood book. Both books won British Sports Book Awards too.

His The Footballer Who Could Fly didn’t win the autobiography or biography category at the Sports Book of the Year Awards at Lord’s the other night – did anything stand a chance against David Walsh’s Seven Deadly Sins? – but in any other year it probably would have triumphed.

Yes, I’m quietly envious of Duncan. And I have a dream, not quite of Martin Luther King proportions but it goes something like this: the babble of a banqueting hall is hushed; my name is announced and I climb to my feet, feigning shyness and humility before weaving my way around the tables, nodding at a celebrity here, accepting a handshake there, before climbing the stage to accept the award and thank my agent and my publisher, plus everyone who voted for me. Oh, I forgot the music.

As I make my way to the stage there’s music. I’m not sure what. It would depend on the book. But it would be suitably stirring. I quite fancy the theme from 633 Squadron. For that, though, I need an idea that ties up sport with a daring raid on a German V2 rocket fuel plant. Maybe I should think of another tune …

I’m getting ahead of myself. Because even after you’ve written and had your book published, to win a sports book of the year award you still need to persuade your publisher to enter it, and pay the entry fee. And there are other costs to this, too. Anyone believing that awards committees themselves go searching for good sports books is probably still putting out mince pies and a glass of sherry, with a carrot for Rudolph, on Christmas Eve.

Actually, I’ve just been looking back at my output over 40 years and, if I’m honest, there’s not really a contender. In the early days I was knocking out sports books under a variety of noms de plume for a publisher who wished to give the impression that he had a stable of writers at his disposal. I didn’t mind that. In fact, when one boxing book received a merciless review, I was grateful for the cloak of anonymity. The reviewer said: “I haven’t a clue who [I’m still not admitting to it] is but … ” And I thought: “Yes, mate, and you’ll remain in ignorance, too.”

I did think that my Gas Masks To Goal Posts: The Story of Football in Britain During the Second World War might have stood an outside chance of at least being nominated, not least because our own Peter Wilson was kind enough to give it a glowing review on this website. But the publishers, Sutton (who coughed up a £5,000 advance) were by then in the process of being bought up – and subsequently busted; now you know why – and they weren’t interested in entering competitions any more.

And Pen and Sword might have put forward my Hitler’s Olympics. After all, the great Frank Keating described it as “startlingly good, vividly illuminating … ” But it never happened, probably because there were at least three other books covering the same subject, one even with the same title (well it was the 70th anniversary of those 1936 Games).

So, as you can see, honours have eluded me. I will continue to walk in the shadows of men like Walsh and Hamilton.

Instead I have to content myself with appearing in the index of Phil Shaw’s 2003 Book of Football Quotations, where I’m neatly sandwiched between those two literary giants, Bruce Rioch and Andy Ritchie.

As a matter of fact, I’m also in the index of Family Britain, a brilliant history of the 1950s by David Kynaston, only here I’m snuggled up next to 10 Rillington Place, the house where the unassuming John Reginald Halliday Christie strangled at least eight females, so I make rather less of that. In fact, when I mentioned this to the SJA secretary, he shuddered. The film still frightens him.

In the meantime, I wonder if it is possible to set out to write something with the sole intention of winning a sports book of the year award? I’ll give that some thought while sitting back with a glass of passable red and dreaming of that moment – “ And the winner is … ”